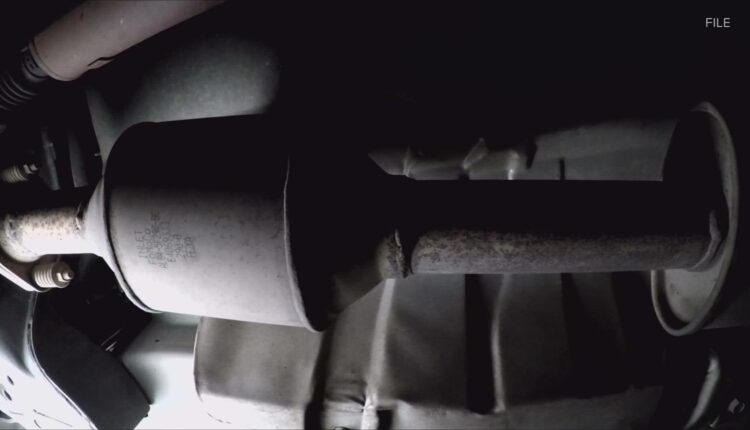 The department uses city resources to engrave the VIN number of residents’ vehicles to prevent and track theft.

It’s called Project CATCON ID, and it allows Everett residents to schedule a free appointment at the city’s dealership, where a mechanic will engrave the vehicle’s catalytic converter with its VIN and highlight the number.

“This will allow us to track these catalysts and make it easier to find out where they are going, who they are being sold to, and it will be easier to track down and arrest the perpetrators,” said Everett police officer Kerby Duncan.

Drivers will also receive a window sticker stating that the converter has been marked.

“Our first hope is that potential thieves will see the sticker or engraving with the highlight and decide not to steal your catalyst,” said Duncan.

Catalysts are made of precious metals and are currently a hot item among thieves. Everett Police found the thefts quadrupled in six months, from eight reported thefts in January to 35 in June.

Duncan recognizes this as a growing problem across the Puget Sound. In June, Kent Police found more than 800 stolen catalytic converters across the region.

“We understand that it is annoying and frustrating for owners to come out and find that this important part of their vehicle is now missing and it will cost several grand to replace. So that’s just one of the ideas we’ve been working towards, ”said Duncan.

The department is still looking for ways to investigate the thefts. With the new Project CATCON ID, Duncan said, Everett police will be watching for a change in the number of catalytic converters stolen.

“The more converters we can engrave, the better,” said Duncan.

The Everett Police’s first Project CATCON ID event will be held on August 21st. The department opened dates for the event Tuesday and said they would be occupied in less than two hours. Duncan said the department has other events planned and these dates will be posted on the City of Everett website.

Letter: Street violence in Seattle? Nothing to see here | Opinion