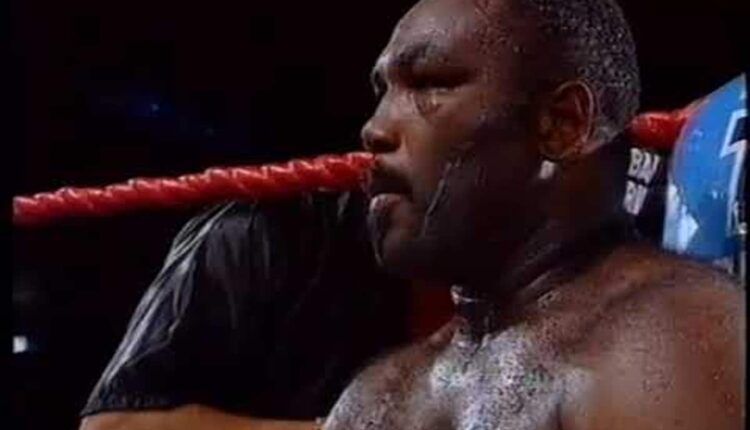 Just like the mythical creature that is said to live in the forest, the real ring warrior Everett “Bigfoot” Martin has not been seen in a long time.

Wherever he is today, the hope is that the 57-year-old from Tyler, Texas is happy, enjoying life, and overall in good shape. For Martin, AKA Bigfoot, he made every penny of his ring earnings the HARD way.

In August 1984, Martin turned pro in the super middleweight division and became one of the toughest, most resilient and consistent heavyweights in the sport.

They call guys like Martin “journeymen” or “test horses”, but Martin was different because he could sometimes get the big win. Check out the prominent tall men Martin first lost to:

Martin could cause a stir in his day, as he did when he beat a 19-2 Bert Cooper in June 1988 or when he beat a 37-3 Tim Witherspoon in July 1992. Martin also had the occasional near miss, as was the case when he faced a 27-0 Moorer in March 1992; Bigfoot drops the future heavyweight king twice. Martin often fought at short notice and stood in a row: Dwight Muhammad Qawi, Foreman, Mason, Coetzer, Damiani, Smith and Moorer – all in a period of only 34 months. Bigfoot was really amazing.

A 17-0 Klitschko was dissatisfied with his decisive victory over Martin in March 1998, and the two met again, with a 25-1 Wladimir who managed to take the TKO win in April 1999. Not too many guys stopped the 5’11 ”Texans. Slowly, over time, Martin fought first at 168, then light heavyweight, then heavyweight. Martin never left the ring with a title belt strapped around his waist. But Martin enjoys a title; as unofficial as it is – that of the journeyman king.

If he reads this article, I hope Bigfoot Martin doesn’t find such a title offensive. Anyone who knows anything about Everett Martin knows that he is a fighter who deserves nothing but respect. It is said that journeyman are an integral part of boxing; even the backbone of the sport. Bigfoot Martin was indispensable for all fighters who wanted to learn their craft. Here, too, Martin tested the very best. And he pissed off a couple of them.