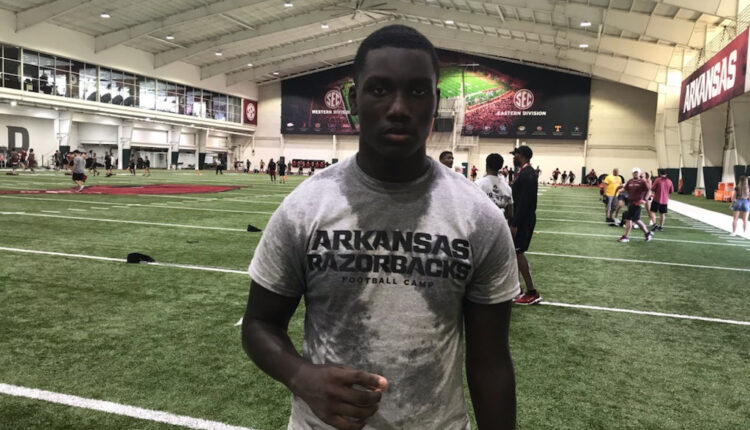 Among the campers was Class of 2023 linebacker Everett Roussaw, 6-2, 215, who received a scholarship from Michael Scherer and the Hogs. After the camp, Roussaw spoke about how he had fared.

“I’ve learned a lot of things that I will definitely go home and work on,” said Rousseau. “I feel like I’ve built a relationship with the coaches.”

Something else Rousseau can go home with is an offering from the Razorbacks, who have joined Mississippi State and Central Florida to offer it.

Rousseau talked about what he likes about Arkansas.

“I love Arkansas,” said Rousseau. “I feel like it’s a very welcoming environment and I love the coaches and how they are very active in showing us the right way and telling us.”

He worked with Scherer at camp and was impressed with who his future college coach could be.

“I love coach Scherer,” said Rousseau. “He taught me something today. For example, working on my hips and leverage and staying low so I can break faster. I feel like I’ll be working on it in the back yard every day. I’ll go home and definitely work on it. “

Jimmy Smith is a former assistant and head coach at Cedar Grove. He now trains the running backs for Sam Pittman.

“I really love coach (Smith),” said Rousseau. “He really paved the way for the children at Cedar Grove, Georgia. I love the coaching team very much. You’re building something new and I feel like it’s special and I would love to be a part of it.

“He built a pipeline from Cedar Grove to Arkansas. I feel like he’s doing great things and he’s definitely someone to look up to. “

Smith and Arkansas already have a commitment from Cedar Grove four-star racer Rashod Dubinion. Does that help the razorbacks with you?