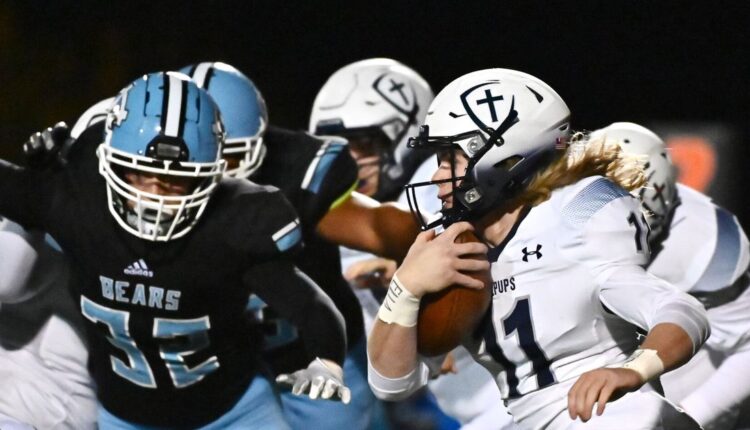 There are games on the schedule that don’t need hype, like when a pair of traditional rivals meet in week 6 – both have zeros in the losing column in the league game.

This was the case on Friday.

If you were touting the Greater Spokane League 4A matchup between the hosting Central Valley Bears and the visiting Gonzaga Prep Bullpups, you would be sure to mention the contrast between high-scoring attacking styles and devastating defenses on both sidelines.

Sometimes things live up to the hype. It did Friday for three quarters.

Ryan McKenna had touchdown runs of 43 and 45 yards and the Bullpups got closer to tying the top 4A seeds to Week 10 crossovers with a 35-7 win over the Bears.

After two successful attacks, it was Gonzaga Prep’s defense that made the difference. It caused three ball losses and stacked six sacks, several in the fourth quarter, when the Bullpups turned a two-goal game into a crooked final.

“Games like this, where the whole team comes together, that’s what we play for,” said Kaz Melzer, G-Prep defender.

“The defense played well throughout the game,” said G-Prep coach Dave McKenna. “We gave up a long drive and then some uncharacteristic things. (Defensive Coordinator HT) Higgins said it was a great game and the kids were dialed in. “

“We had a good meeting and we decided that we need to keep our containment better,” said Cavan McKeirnan, G-Prep defensive player. “We did better there in the second half and we got together pretty well.”

Central Valley (4-2, 4-1) was able to move the ball early and take the lead. But several long drives in the first half stalled or ended due to sales.

“We had the opportunity early on, but they put a lot of pressure on us defensively and we just weren’t as efficient as we had been in the past few weeks,” said CV coach Ryan Butner.

McKenna finished with 159 yards on 18 carries.

“He’s a beast,” said Melzer. “I love this kid. Every night he plays his heart out. He’s a real leader on the team and he’s doing great things for us. “

“I honestly haven’t done too much,” said Ryan McKenna. “The O-Line was an incredible block and we had some guys who rose big and played great games.”

“He’s a great football player, I’m proud of him,” said Dave McKenna of his son. “But he has 10 other guys out there fighting him, so it’s a team thing and I’m proud of them.”

With the bullpups (6-0, 5-0) in the driver’s seat of the 4A, they could be forgiven for looking forward to their match at the Mid-Columbia Conference in week 10.

“No, no, no,” said Dave McKenna. “We only spend a week with these guys, especially with all the things that have surrounded us for the past 18 months. We want to enjoy every moment we have with these guys. “

“Our group is special,” said G-Prep defensive tackle Ephraim Watkins. “I think we can rush any passerby, we can chase anyone. (CV QB) Luke (Abshire) is amazing, he’s the raunchiest quarterback I’ve ever played. But we got on. We were adamant and I think that’s the difference tonight. “

Abshire completed 19 of 39 passes for 215 yards with two interceptions.

Bears linebacker Brandon Thomas forced a fumble on the Bullpups’ first possession, causing G-Prep to punt from the depths of his territory. CV took over on the GP 45 yard line. Abshire hit Hudson Dayton in an instant for 37 yards for 1, and Trevor Gravelle pounded 7-0 ahead from there.

On the next drive, the bullpups turned a fourth and one in midfield. McKenna took an 18 yard win, then Matteo Saccomanno cracked the middle untouched for a 24 yard score to tie it.

At the beginning of the second quarter, a gross punter penalty on CV gave new life to a bullpups drive.

Three games after the flag, McKenna broke through the left side and went 45 yards for a TD and a 14-7 lead.

“It was just a huge hole,” said McKenna. “It’s hard not to see, honestly.”

The Bears had a 12 play drive stall on G-Prep 16, but the snap on a field goal attempt was mishandled and the Bullpups took over on their 32nd A 26-yard run by Lilomaicua Mikalcle got it into that CV territory. On fourth-and-2 out of the 4, Nick Bankey went off the tackle and pulled a defender into the end zone.

The bullpups led 21-7 during break.

G-Prep took his first drive of the second half to CV 26, but defensive tackle George Sonko recovered a fumble. CV couldn’t get a first down, but Abshire’s punt put G-prep on his 2nd.

“I think it was a perfect game to show how we play as a team in defense,” said Melzer. “The DBs lock themselves so that our D-Line gets the pressure and everyone does their job.”

After a three-and-off, CV got it back at G-Prep 40, but a long jump into Abshire’s end zone was intercepted when the Bears receiver fell and the quarter ended goalless.

“Our defense did a good job early in the second half and kept us in the game,” said Butner. “We just couldn’t take advantage of anything offensively.”

A bad shotgun snapshot brought CV to 2 and the resulting punt came to 43. After no win, McKenna stormed into the center, then moved to the sideline to cover the distance and the Bullpups to 28-7 with 8½ minutes to go bring to .

After forcing a turnover on Downs, G-Prep was fourth and third on CV 27. McKenna attempted his second pass of the evening and hit Bo Howell in the end zone to top the goal.

“It’s a great atmosphere, CV is a great football team,” said Ryan McKenna. “They played amazingly, but our defense really strengthened when it was needed.”

Winterhawks shut out by Everett, lose third in a row