“Genocide has no honor”: rally in Riverfront Park calls for the memorial in downtown Spokane to be removed 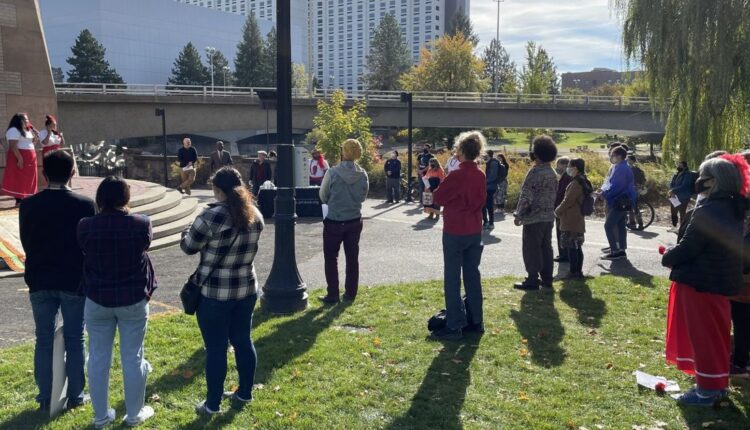 Dozens of statues linked to racial injustice have been removed from public spaces across the country since last year, and some people are hoping a controversial one in downtown Spokane is next.

About 40 people gathered at the base of the clock tower of Riverfront Park in Spokane on Saturday and demanded the demolition of the John Robert Monaghan statue on the corner of Monroe Street and Riverside Avenue.

“I know the first time I saw the Monaghan Statue I remember my blood boiling and making me feel so, so unwelcome,” said Kiana McKenna, a Samoan American and director of Eastern Washington Services for the Pacific Islander Community Association, the crowd.

Monaghan died in 1899 near Apia, Samoa, in an effort by the United States to colonize Samoa.

Monaghan was the son of a wealthy Spokane businessman, James Monaghan, who made money in mining and railroads. The younger Monaghan graduated from Gonzaga College in first grade and later attended the US Naval Academy.

The plaque on the downtown statue reads: “During the retreat of the Allied forces from the deadly fire and the overwhelming number of fierce enemies, he alone withstood the terrible onslaught and sacrificed his life to a wounded comrade Lieutenant Philip V. Lansdale United Defend the States Navy. “.”

The John Robert Monaghan Memorial will be displayed on the corner of Monroe Street and Riverside Avenue in downtown Spokane on Saturday. (Garrett Cabeza / The Spokesman review)

Jade Faletoi, a member of the civic council leading efforts to remove the statue, said ahead of the rally that the monument, which the Samoan people describe as a “wild enemy”, is racist.

Joseph Seia, executive director of the Pacific Islander Community Association of Washington, said his family came from the villages where Monaghan and other soldiers had killed thousands of villagers.

“There were thousands of people shot by John Monaghan and somehow this universe gave him a statue and two warships named after him,” Seia said. “He’s a child killer. It’s not an honor. “

Margo Hill, a member of the Spokane Tribe of Indians and a professor at Eastern Washington University, said she and others are not trying to erase history but are simply trying to tell the truth. The truth is that Monaghan was not a war hero, but that he “murdered innocent villagers,” she said.

“There is no honor in genocide,” said Hill.

Hill was one of the leaders in converting Fort George Wright Drive into Whistalks Way, which runs on the edge of Spokane Falls Community College. Col. George Wright led a violent campaign against indigenous peoples in the mid-19th century when white settlers spread to the area.

Paul Schneider, vice president of the Spokane County Human Rights Task Force, said Saturday the Samoan community is vital to Spokane and deserves to be treated like everyone else.

“If we continue to honor genocide, we are not doing justice to the people in this community,” he said.

Seia read the names of the villages that Monaghan and the US government burned and gunned down. Ten people each laid a red rose on a carpet on the steps of the clock tower to honor those killed by Monaghan and others. Seia said many of those holding a rose on Saturday were descendants of Pacific Island villagers affected by Monaghan.

Malie Chanel said she was a descendant of some of the massacres.

“We are here to be the voices of our ancestors for the children killed,” said Chanel.

After the speakers, the crowd sang and marched across the Spokane River to the big red car in Riverfront Park.

According to the website sign.moveon.org/petitions/remove-the-racist-john-r-monaghan-Stand, the volunteer-led citizens’ council collected 1,183 signatures with a goal of 2,000 on Saturday afternoon. statue-in-downtown-spokane-wa.

Council co-founder Hana Truscott said 20 to 30 people signed up at the rally on Saturday. She said the group would submit the petition and a letter the companies signed to Spokane City Council in the coming weeks.