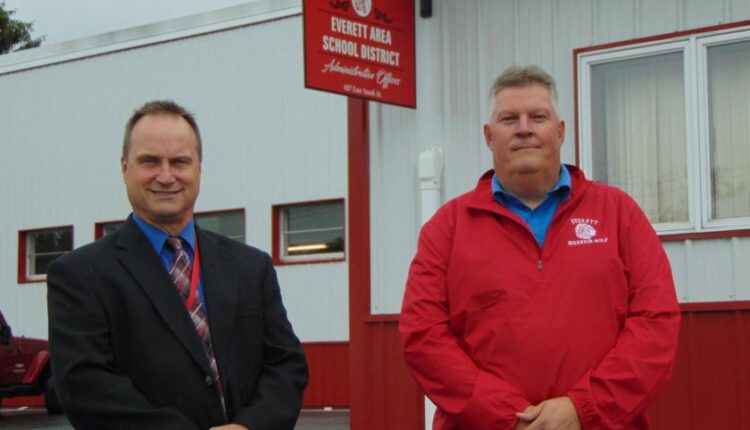 EVERETT – Everett Area High School was selected this week as the national winner of the Blue Ribbon School Award, an honor the school administrators believe resulted from years of progress in the district.

The U.S. Department of Education selected the high school as one of 13 Pennsylvania high schools to receive the award that year and named the school an exemplary high-performance school.

“This award reflects years of hard work and dedication from our board of directors, faculty, administration, students and the community,” said Superintendent Dr. Danny Webb. “We couldn’t be more proud of what we have achieved. By working together, we have created strong and productive educational experiences for all of our students. “

Receiving the award has been a goal of Everett administrators since 2013.

“This is not something that came in a year – that we just decided to do it,” said Assistant Superintendent Dr. Jim Hollis. “It is the culmination of nine years of work from all sides. The community had to get involved and accept the change. The teachers had to get on track and pursue the new goals. The student and the administrators – everyone had to be on board, otherwise none of them would work. “

Webb said the district has made constant changes since 2012 when the current administration team and much of the school board began work on a new comprehensive plan.

At the time, the district was facing nearly $ 1 million in debt, had less than $ 500,000 in reserves, and was constrained with outdated software and technology and depleted facilities and infrastructure, Webb said. Current school policies were also out of date, some of them as early as the 1980s.

“We started with a situation that was very desperate,” said Webb. “We knew where we wanted to be in 2013, but we didn’t have the resources. Every time we had an idea for an initiative, we had to find a way to fund it. “

About 200 people, including school staff and community members, contributed to this plan.

“Our goals then were to bring Everett students all the opportunities that their peers across the country had in large school systems,” said Webb. “We felt we were capable of leading the way in education and our long-term ambition was to become a Blue Ribbon Award winner.”

Technology and the district’s cyber academy were central elements of the district’s planning to better adapt to the changing educational environment.

“Back then, our online program consisted of pencil and paper,” says Webb, looking back. “It didn’t reflect any online learning program at all.”

Webb said the strategic plan has high technology goals, including implementing a 1-on-1 program that provides a smart device to every student.

“This had to be done without using any district funds because we had no district funds,” said Webb. “… We are making our entire 1-to-1 technology program available to taxpayers free of charge.”

At the same time, plans to revive the economy and improve facilities were also in place. Webb said the improvements were planned years in advance and included in annual budgets, noting that each school building has seen significant modernization over the years.

“Every one of our goals, from technology to education initiatives, has been 100% funded by competitive grants,” said Webb. “During this period, over $ 2 million worth of competitive grant funds have been made available.”

Webb said a focused school committee and the district’s facilities, planning and finance committees were forward-looking, finding that annual budgets were based on five-year plans.

“The scholarships gave us the flexibility to get our budgets where they needed to be, but budget balancing and budget compliance came from administration, a focused board of directors, and very disciplined office staff to the spending plan. We have been almost 100% with our spending plan every year since 2013. “

Webb said the district is now in a safe financial position for years to come, with more than $ 6.5 million in reserves, much of which will be used to complete the renovations of the Everett Elementary.

The educational goals were published annually and aligned with the district’s strategic vision, while curriculum mapping took place several times a year.

“Our teachers and staff have embraced the changes,” said Webb. “You have had a lot of training to get used to new technologies and to embrace these new learning paths. Our teaching staff met the expectations that were necessary to offer education on a new platform. “

“There were times when things were very uncomfortable, but in order to meet the goals for the organization and for the students, and to give them what they deserve, the changes were necessary,” said Webb.

Both Webb and Hollis cited the stability of the administration and board of directors, which for the past nine years “worked as a team to solve problems,” as the reason the district was able to solve the problems it faced.

“The constant shift at any of these levels only creates chaos,” Hollis said, noting that he had worked with five other superintendents from 1999 to 2011 before Webb took on the role.

While the superintendents said the school staff deserved praise for their efforts, Webb said the students were the reason the district deserved the honor.

“Our students met or exceeded our expectations at all levels,” he said. “But they also exceeded the expectations of the state, and so we were nominated for this award.”

In recognizing the award winners, Education Secretary Miguel Cardona noted that this group of award winners “shows what can be done when dedicated educators and principals create a vibrant, welcoming, and empowering school culture where abundant teaching and learning can flourish.”

“I commend this school and all of our Blue Ribbon Honors for their work to ensure the health and safety of students while meeting their academic, social, emotional and mental health needs,” Cardona said in a press release. “In the face of unprecedented circumstances, you have found creative ways to engage, care, protect and teach our children. Blue Ribbon Schools have so much to offer and can serve as models for other schools and communities so that we can really build better. “

Spokane Valley Fire Roundup: Drivers are encouraged to slow down the seasons and weather