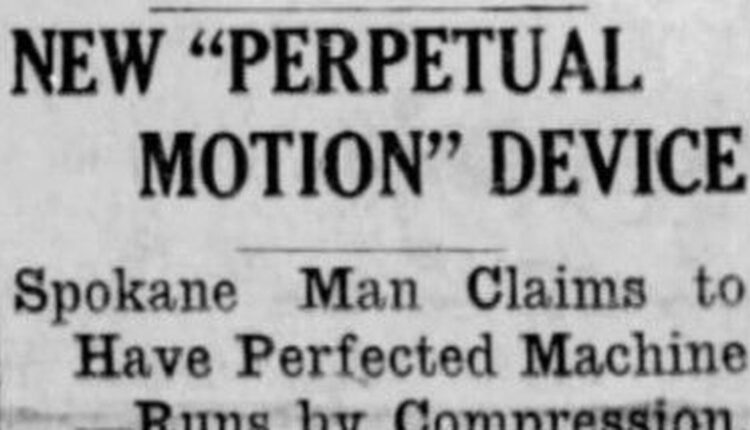 FL Minnick, a resident of the Wilson Hotel in Spokane, claimed to have made a “perpetual motion” machine.

He said in a written statement to the Spokane Daily Chronicle that the machine was “very simple”.

“The machine, which contains only 26 parts, has practically 50% excess output after turning,” he wrote. “The machine is built according to the compression plan and runs at a very high speed. The power can be increased or decreased at will by increasing or decreasing the compression by means of a valve. A machine of this kind should mean millions of dollars to the inventors. “

The Chronicle didn’t go into whether a “perpetual motion” device was actually feasible – but the editors got the story on the front page.

From the transit beat: The two Spokane tram companies announced that they are ready to meet with city officials and civic organizations to “resolve the Jitney tram controversy.”

The two companies had long claimed that the city’s approval for jitneys (private buses and vans) deprived them of passengers and put the entire tram system in financial danger.

The companies stressed that they were “always ready” to engage in such a discussion.

The 25 Safest Colleges in America