100 years ago in Spokane: Railway workers threatened with strike and authorities caught a gang of “Bunco men” 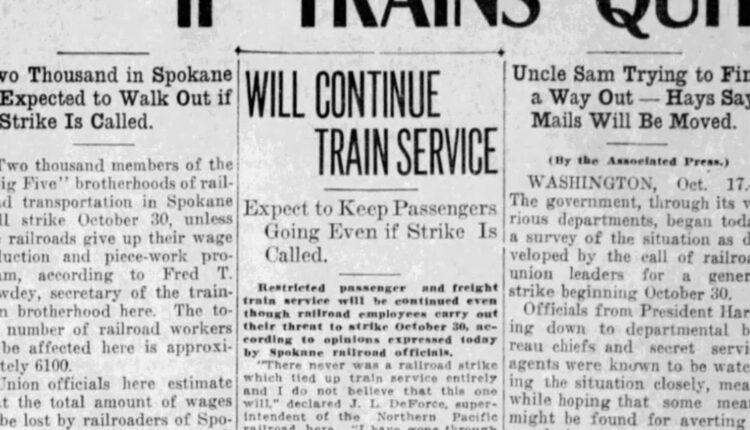 A nationwide rail strike loomed and 2,000 Spokane rail workers were on the verge of leaving the company unless rail companies backed off a proposed wage cut.

The secretary of the Spokane Brotherhood of Trainmen said its members were “firmly behind the general strike movement”.

They represented about a third of the total number of railroad workers in Spokane. About 11 other unions are also considering joining the strike, which is scheduled for later this month.

Federal officials in Washington DC were at work trying to stave off a strike.

From the bunco beat: A “gang of alleged horse racing bunco men” was disbanded after they tried to defraud a Spokane salesman for $ 5,000.

The scammers befriended SV Clayton and told them that he might be the luckiest man in the world because they had an inside dope at the big races. They always won their bets.

They convinced Clayton to place a $ 1 bet and shortly afterwards they gave him $ 6 in winnings. The next day they persuaded him to bet $ 5 and gave him $ 20.

Then they pushed him to sell his North Dakota farm and wager $ 5,000. Clayton pretended to participate, but suspicions had been piqued. He notified the police.

The Bunco men claimed they would give Clayton $ 15,000 once he showed up with the $ 5,000 in revenue from his farm. At the appointed time, two officers accompanied Clayton and grabbed one of the Bunco men.

The other walked two blocks “until the officers pulled their guns and began shooting bullets uncomfortably close.”

Detective Martin J. Burns said the Bunco men “showed poor judgment in choosing their victim.” Not only did Clayton see through her plan, but he ended up being more than $ 20 ahead.