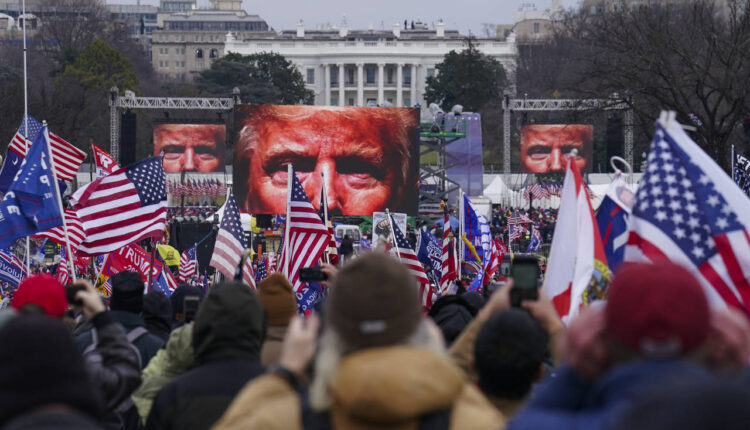 Six Seattle police officers who attended President Donald Trump’s speech on Jan. 6 must prove their innocence during an investigation. And if they don’t present personal documents to the city, they face dismissal.

The investigation into the officers began in January. Two officials posted photos on social media of Trump’s speech in the Capitol. Then four other officers reported that they were also in DC. Every officer was on vacation and no one was in uniform.

But now a new demand: hand in private documents or get fired.

Documents include text messages to family or friends, photos taken while on vacation in DC, receipts from hotels or restaurants they visited, and even personal bank records during their stay.

According to an internal email from the Seattle Police Officers Guild (SPOG) to members received from the Jason Rantz Show on KTTH, “the city has informed us that the order was supported by Director Myerberg’s threat of resignation.”

“I can confirm that the OPA directed officials to provide evidence of their whereabouts and activities on January 6, and particularly during the uprising inside and around the US Capitol. This includes receipts, text, photos and records of financial transactions, ”OPA director Andrew Myerberg told the Jason Rantz Show on KTTH.

The police were asked questions about politics

At least some of the officials were interviewed personally by the OPA about their political beliefs. It is unclear what specific questions were asked by OPA. In light of the investigation, officials were likely asked if they believed the election was stolen or if they attended the rally for believing then-President Trump’s claims about electoral integrity.

At that time, the SPOG leadership rejected the survey.

“In several of the interviews, the aforementioned employees were instructed to answer personal protected political questions that the SPOG believed had absolutely no influence on this investigation,” wrote SPOG President Mike Solan in an email to members. “Our board representatives have vehemently contradicted these questions because they are inappropriate and represent a violation of civil rights.”

In Seattle, political ideology is a protected class under the Discrimination Act. It is also illegal to take revenge on someone based on their ideology.

What kind of due process?

Myerberg insists that these officials are treated fairly.

But these officials are not granted legal protection. No evidence has been presented to prove a crime and yet she is being investigated for her undeniably protected political speech. City workers are legally allowed to attend a speech by the president, even if it is Trump.

No due process is given to these officials. And it’s less of an investigation than a politically driven witch hunt.

OPA is effectively asking officials to prove they have not committed any crimes, rather than relying on evidence to show that something happened beyond a trip to see the president. And to ask any political question is a remarkable abuse. The political positions of any of the officers, including their opinion on the election, are irrelevant. Not a single answer to a political question would determine whether an officer has committed a crime.

It is important to note that this investigation is taking place while the progressives are waging a war on the cops. Activists are already falsely claiming that these officials were part of the riot. And city guides have shown little interest in defending the police, let alone ensuring that officers are treated fairly.

Last week, I published the story of a senior executive in the Seattle Department of Finance and Administrative Services (FAS) who sent a malicious email denouncing the police as white racists. Instead of apologizing for the employee’s email, a department spokesperson defended it.

Seattle City Council is still trying to disappoint the police. They even want to fire officers based on the color of their skin (well, if they’re white). Councilor Kshama Sawant helped fuel the armed uprising that created the Capitol Hill Autonomous Zone and drove police from their own district to a lawless zone where two black teenagers were murdered. Councilor Theresa Mosqueda even defended a man who threatened to murder the police.

Who is looking for them? Especially not the media, which will hardly exert any pressure on the city to ensure fairness. Many reporters are actively trying to slander police officers. The Seattle Times employs left-wing anti-police agents like Mike Carter. Unless it smears hit pieces on cops, the Times generally only covers law enforcement stories that they can portray as anti-police.

Can the police get a fair shake in this town? It’s hard enough.

So how is it appropriate to investigate the police and then effectively seek evidence from them in order to set yourself free? Shouldn’t you have reasonable suspicions of lawlessness or even evidence to warrant an investigation?