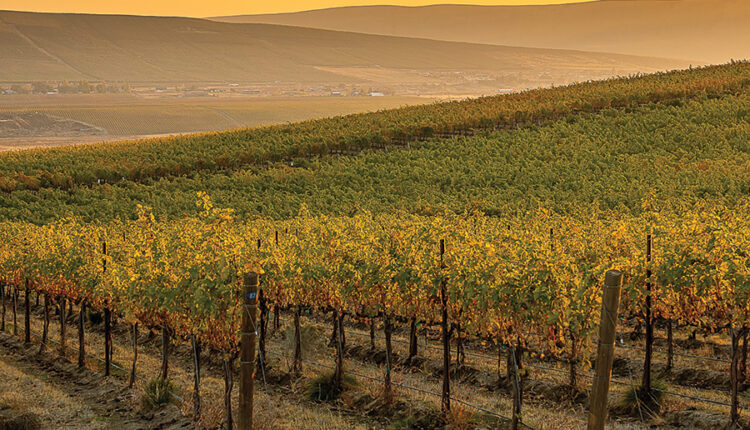 In recent vintages, Washington’s wine industry has retreated due to overproduction, declines in sales, and the pandemic. However, the reasons for optimism continue to mount despite the state crushing just 175,000 tons in 2020 – the lightest harvest since 2011.

“Washington’s wine industry appears to have turned around after a difficult year in which shipping volumes were down 7%,” wrote the former University of Washington assistant professor.

Washington consumer packaged wine shipments increased 8% in the first quarter of 2021 compared to the same period in 2020.

A clearer sign of confidence in the future of the state’s wine industry is the recent acquisitions and investments by Josh Lawrence and Tom Merkle.

Neither is a hedge fund manager nor a foreign investor. Rather, they are two of the Columbia Valley’s most respected winemakers. Each family owns and operates their own winery.

“The Washington wine industry definitely has a wide range of confidence levels from extremely bullish to quite bearish,” said Lawrence. “We tend to be half full, but I believe the indicators support that view for now.”

That spring they announced the purchase of Desert Wind Winery in Prosser, an acquisition by the Fries family, Oregon, which comprised more than 400 acres of vineyards on Wahluke Slope near Mattawa. The deal included the purchase of the hotel, restaurant, and other commercial buildings for $ 2.4 million.

In 2019, Lawrence and Merkle teamed up to buy the 150-acre Conner Lee Vineyard, one of the state’s most historic plantings with roots dating back to 1980.

These are the types of transactions that typically make headlines for companies like Precept Wine in Seattle, the Northwest’s largest privately owned wine company that has also positioned itself to grow during the pandemic.

“I can’t ignore the fact that we are inherently opportunistic in our approach to business, and especially when it comes to acquisitions,” said Lawrence. “The downturn in recent years has presented us with some great opportunities to acquire very high quality assets at affordable prices. We know we won’t always catch up at the beginning of the upswing, but we’d rather fight for a season or two than buy at the top of the market. “

Their combined expertise spans much of Washington’s wine country.

Lawrence and his wife Lisa own Gård Vintners, a brand with 8,000 boxes and three tasting rooms fed by their 450 hectares of vines on the Royal Slope.

Merkle – the honorary winemaker of the Washington Wines auction 2017 – and his wife Tami are partners of the famous winemaker Jessica Munnell at the Wautoma Springs Winery in Prosser. Her brand’s winery of the same name is located near historic Cold Creek Vineyard and a short drive west of Wahluke Slope, where Merkle manages multiple locations for Zirkle Fruit Co.

“Tom has been a great partner with his ability to manage a lot of moving parts while maintaining extremely high quality, high yield grapes for Ste. Michelle, ”said Lawrence. “He is also very connected to the industry and has a similar perspective on the development of this industry.”

The early returns for 2021 suggest an increase, fueled by overseas shipments, according to Bitter. Last year it was direct sales (DTC) and deliveries to state wine club members that supported smaller producers like Gård Vintners.

“Our DTC approach with Gård really paid off during the pandemic last year as we had a record year for sales,” said Lawrence, who runs retail stores in Walla Walla, Woodinville and Ellensburg. “The tasting rooms have turned amazingly over the past year and I pay tribute to our staff and the marketing team at our tasting rooms. We were incredibly flexible with curbs, takeaway tasting experiences, discounted shipping, etc. and it definitely paid off. The loyalty of our wine club members made the difference, especially when it came to sales difficulties. “

The reception for their estate wines produced by Walla Walla winemaker Aryn Morell prompts the Lawrences to increase production to 10,000 boxes with the 2021 harvest, to open the tasting room and restaurant of the Gård Public House in Royal City this spring, and at least one more Satellites open up tasting room for Gård – maybe in Vancouver, Washington, but not on their latest purchase in Prosser.

“We don’t plan to have Gård available in Desert Wind, except possibly in the restaurant,” said Lawrence. “We were in joint tasting room situations in the past and were not really satisfied with it. The Desert Wind brand is strong enough to have the tasting room to itself. “

Between the negotiations on the purchase of Desert Wind and agriculture for themselves and their viticulture customers, the Lawrences will toast the establishment of the Royal Slope American Viticultural Area by the federal government on September 2, 2020.

“The Royal Slope AVA was a long process, but it was great,” said Lawrence. “We believe it has a lot to do with our increased demand for grapes this off-season. In fact, we are essentially sold out and would have liked to have been more aggressive with the planting in recent years. “

It’s an emerging region that has long been a granary for renowned winemaker Mike Januik on Novelty Hill in Woodinville. Morell uses Royal Slope fruits in wines that he makes for the Mullan Road Cellars label of famous Napa Valley winemaker Dennis Cakebread. Mellisoni Vineyards in Chelan – Wine Press Northwest Magazine’s Washington Winery of the Year 2021 – is also pulling heavily from the area.

“One of the reasons we are opening our tasting room and restaurant in Royal City is because we are optimistic about Royal City over the long term, beyond just plant production,” said Lawrence. “We have a lot of customers wanting to visit the vineyards and that gives us the opportunity to do so and then sit down and enjoy great wine and good food.”

It is often in the nature of farmers to diversify their operations, and the Lawrences and Merkles are now in the hospitality industry by taking over Desert Wind, an 11,000-crate winemaking facility in Prosser that has a fully equipped commercial kitchen and boutique -Hotel with rooms that overlook the Yakima River.

“Desert Wind is an unparalleled destination in the Yakima Valley, and we are excited to expand its offering there with an even greater focus on food and wine pairing, private events, and lodging experiences,” said Lawrence.

Desert Wind lost a valued neighbor last fall when the Walter Clore Wine and Culinary Center in Prosser closed. It was a tourist attraction and tasting room for wines produced across Washington state for 10 years.

The Lawrence and Merkle families weren’t the only winemakers investing in Benton County this spring.

Spellman Gamble’s late father, John, was the 18th Governor of Washington State and she spent three decades on the University of Washington’s clinical faculty.

That spring, St. Michelle switched its winemaking team, marked by the departure of Bob Bertheau as long-time head winemaker of Chateau Ste. Michelle. He was replaced by Katie Nelson while Will Wiles took over Nelson at Columbia Crest. Leah Adint – a product of Washington State University’s Viticulture and Oenology Program – moved from Chateau Ste. Michelle at Erath Winery, a sister company in Oregon.

According to research by Bitter, Columbia Crest is now the state’s top producer, with 1.8 million boxes in 2020. Chateau Ste. Michelle is next with 1.4 million cases. Richland’s Goose Ridge Winery produced 914,162 boxes, making it number 5 on the top 10 list.

Bitter’s company Vintage Economics found that total production at Washington wineries fell from 17 million boxes in 2019 to 12.75 million in 2020. Its data, available on a paywall at Vineconomics.com, shows that 70% of the state’s wine comes from the cellars of the top 10 producers, using a list provided by West Richlands Vinmotion Wines, owned by Pacific Rim Winemakers 236,127 boxes is rounded off.

To raise awareness among consumers, the Washington State Wine Commission and Washington Winegrowers Association launched the Washington Sustainable Certification Program. A pilot project is to be introduced by the 2021 harvest, the full program is to be implemented in 2022. The aim is for wineries to label their bottles as “sustainably managed” with a Washington-specific brand. Growers put the program on hold at a cost of $ 6-10 an acre.

Spokane Shock Rewind: Charles McCullum’s arm and legs are critical to victory on the road