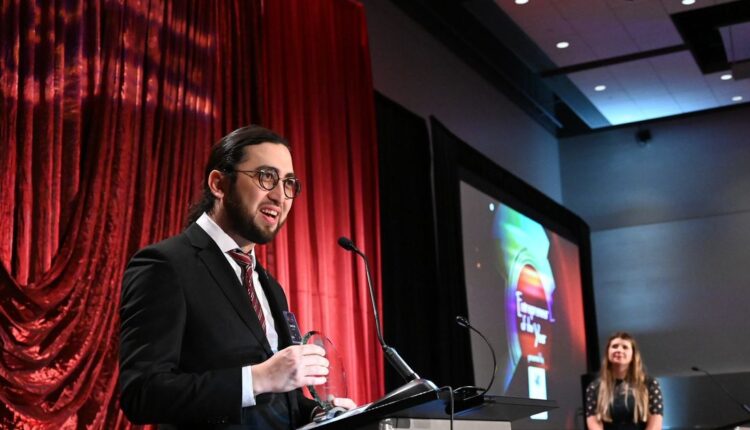 A Spokane-based company that developed a device to give voice to people with neurological disorders was recently named Entrepreneur of the Year by the Association of Washington Business.

Medical device startup Parrots Inc. was honored at the association’s annual Evening of Excellence event at the Greater Tacoma Convention Center on Thursday.

The event, which showcases outstanding companies in the country, was attended by more than 300 people.

“We are really honored and excited,” said David Hojah, CEO and Founder of Parrots Inc. “We thank everyone who has helped us on this journey from day one. We are really grateful for all the support and for all the family and friends who really believed in us. “

Parrots Inc. developed “Polly,” an artificially intelligent device that can be placed on a wheelchair or bed. In connection with a laptop or tablet, “Polly” offers a 360-degree view so that users can safely navigate their surroundings.

The device also uses machine learning that tracks eye movements to predict users’ needs and communicate in real time. For example, the device can see orange juice on a table at breakfast and predict when a user would like to ask for a drink.

A native of Boston and a graduate of Harvard University, Hojah brings more than 12 years of experience in artificial intelligence, medical devices, robotics, engineering, and healthcare technology.

After Hojah’s uncle suffered a spinal cord injury and his aunt died of multiple sclerosis, he tried to help people with similar conditions maximize their independence.

“I had the feeling that one day I might be able to do something – not just for them – but at least for others,” said Hojah. “When I went to college to study chemical engineering, I was inspired by a lot of people, including Stephen Hawking.

“I believe there are millions of people like Stephen Hawking who lack the easily accessible technology to be the next scientist and engineer.”

Hojah said the idea of ​​starting Parrots Inc. in 2019 was also inspired by his friend Steve Saling, co-founder of the ALS Residence Initiative. It is a fundraising and advocacy group aiming to build homes for ALS patients across the country.

ALS is a progressive neurodegenerative disease that affects nerve cells in the brain and spinal cord, causing a loss of muscle control needed to move, speak, eat, and breathe.

Simpson said he chose to invest in Parrots Inc. in part because it’s a company that is making the world a better place.

“With David’s parrot product, it’s a solution that recognizes the patient’s unique needs, responds, and gets smarter over time,” he said. “That really attracted me.”

Simpson added that Parrots Inc. can make cheaper products compared to others in the market.

“It’s great to see someone like David decide to move out of Seattle and really start their business in Spokane,” said Simpson.

While Parrots Inc. is currently working remotely, the company hopes to move into an office in the university district by January.

Ultimately, Hojah plans to expand the company’s technology to help children with cognitive disabilities or seniors with mobility issues.

“We are on our way to becoming a leading provider of adaptive technology to help all of these people with physical and communication challenges – not just in the US, but in Europe and many other places,” said Hojah.