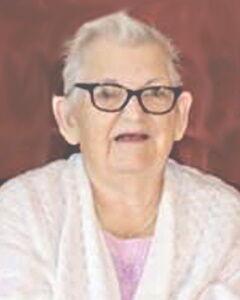 Ethel J. Lambert, 93, of Prairie Farm, Wisconsin, formerly Hutchinson, died on Saturday, October 30, 2021 at the Pioneer Nursing Home in Prairie Farm. The memorial service took place on Friday, November 12, 2021, at Riverside Church in Hutchinson with burial in Woodlawn Cemetery in Annandale. The incumbent clergyman was Rev. Arnold Allison. Vicki Stuber was the organist. Hymns were “Amazing Grace”, “What A Friend We Have In Jesus” and “Rock Of Ages”. Pallbearers were Lauren Wolff, Alan Wolff, Roger Lambert, Tony Lambert, Don Lambert, Cliff Lambert.

Ethel Jean Lambert was born on February 10, 1928 in Hartshorne, Oklahoma. She was the daughter of William P. and Cora (Gilreath) Akins. Ethel was baptized as an infant and later confirmed in her faith as a teenager.

On August 17, 1945, Ethel was married to Orville Lambert in Clarksville, Arkansas. That marriage was blessed with three children, Sam, Donna, and Larry. Ethel and Orville lived in Hutchinson, and later upon retirement, Ethel moved to Vancouver, Washington and then back to Minnesota and Wisconsin. Ethel and Orville shared 50 years of marriage until Orville’s death on February 7, 1996.

Ethel was the owner of We Care assisted living between 1987 and 2007. She was a member of the Riverside Church in Hutchinson.

She loved gardening, canning, reading the scriptures, watching televangelists, and spending time with her family, grandchildren, and great-grandchildren.

Blessed be their memory.