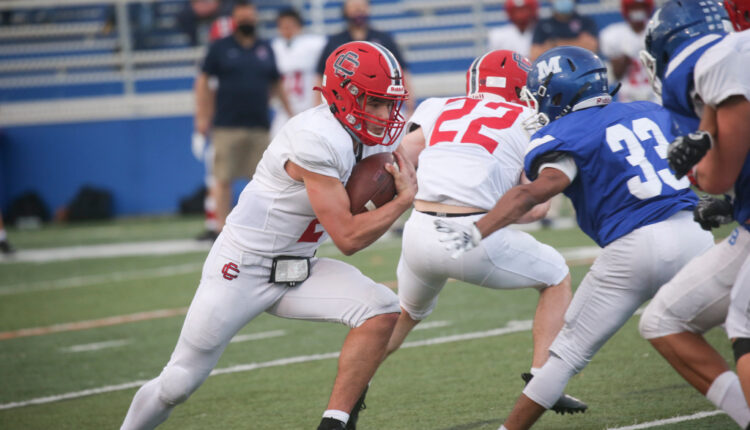 The buzz in high school circles was this fall Catholic monument Decision to only move up a division of Div. 3 to 2 in the new nationwide format.

A mainstay in the Div. 1, Catholic Memorial might very well be the best team in the state – which infuriated more than one school. The Knights are loaded and clearly the team to beat in the Div. 2 as they bring back several All-Scholastic players as well as talented quarterback JC Petrongolo, who injured himself at the season opener and stopped playing.

The path to Gillette will not be so easy for Catholic Memorial as it is in the Div. there are many worthy opponents. 2. Lincoln Sudbury, Mansfield, barn and Natick were unbeaten in autumn 2 and have some good returnees. Marshfield made some very good progress under Chris Arouca and could very well be a top 10 team by the end of the season.

reading returns with James Murphy one of the best quarterbacks in the state while Woburn has an impressive cast back. King Philip is always competitive and there will be a new look Bridgewater-Raynham Part-time job as Lou Pacheco for legendary coach Dan Buron.

While Catholic Memorial is clearly the team to beat in Division 2, there are two Div. 1 Catholic Conference teams giving the knights a fight for their money. Xaverian got past the Catholic Memorial just under eight yards last year and offers one of the best lines in the state that comes with a pair of solid running backs at Joe Kelcourse and Michael Oates. St. John’s Prep struggled last year but the Eagles are poised for a turnaround as all-scholastic running back James Guy is back along with a talented wide receiver tandem in Jackson Delaney and Jesse Ofurie.

Over at the Merrimack Valley Conference, all eyes are on you Central Catholic return as raiders are the two-time Herald All-Scholastic quarterback Ayden Pereira and the all-eight-end Preston Zinter. And over counters with his own dynamic duo by bringing back Lincoln Beal and quarterback Scott Brown while Methuen and Lowell are able to make noises.

Everett Numbers to be the Greater Boston League class, a talented team more than good enough to play with the best in the state. A trio of all-scholastics, wide receiver Ish Zamor, running back Jayden Clerveaux and defensive end Jaylen Murphy are back along with lineman Jayden Biggi.

Jack Funke, Sr. OL, 6-6, 290, Xaverian: This pre-eminent offensive device is the anchor of one of the state’s top lines and has already signed up to Boston College.

Datrell Jones, Jr., RB, 5-9, 175, Catholic Memorial: Despite a lack of time with an injury, the future BC Eagle still managed to run more than 500 yards, leading the Knights to an undefeated season.

James Murphy, Jr., QB, 6-5, 190, reads: Murphy was the main force behind the march to the Middlesex Liberty title, throwing 1,348 yards and 16 touchdowns, earning him a career totaling 38.

Boubacar Traore, Jr., DL, 6-4, 250, Catholic Memorial: Traore was a strong presence in the trenches, collecting eight sacks and forcing some fiddling. He is one of several local talents who orally professes BC.

Ish Zamor, Sr., WR, 6-1, 170, Everett: Although his season was limited to three games in the abbreviated Fall 2 format, the BC-tied Zamor caught eight passes for 250 yards and three points.

OTHER PLAYERS TO WATCH IN DIVISION 1-2