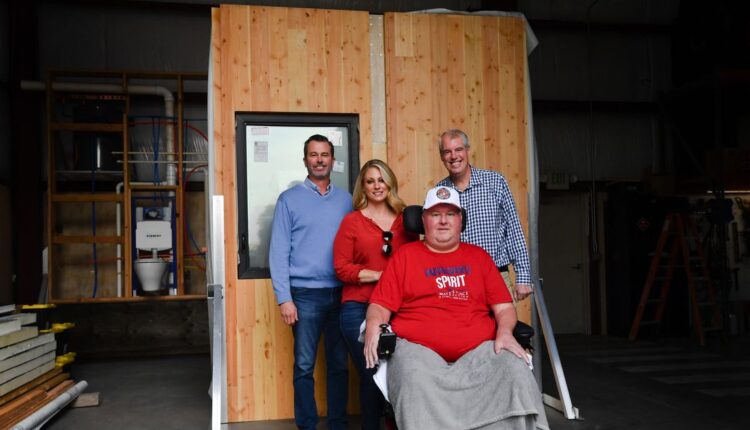 It often costs thousands of dollars for people diagnosed with amyotrophic lateral sclerosis and their families to pay for medical care and make their homes accessible.

The nonprofit Matt’s Place Foundation and a group of regional companies are looking to reduce this financial burden by building an environmentally friendly, state-of-the-art, interactive “smart home” specifically designed for ALS patients and their families to manage. with the disease.

“We’re really pushing the envelope in carbon-neutral design,” said Andy Barrett, board member of the Matt’s Place Foundation. “Matt’s Place’s bold goal is to create the smartest home in the world for ALS patients. It’s unique in that respect, and then of course it’s unique that we are building these for people at risk for ALS and families to keep them together. “

The Matt’s Place Foundation built their first smart home for ALS patients in Coeur d’Alene in 2017 with the support of several contractors, construction companies and subcontractors who donated manpower and materials.

However, the Spokane project is the first ALS smart home to be built with cross laminated timber.

Cross-laminated timber, which is produced by pressing and gluing wooden boards together to form building panels and girders, is gaining national attention as an alternative to conventional concrete and steel building materials due to its low environmental impact and design flexibility. It can be made from small diameter trees to create a strong but lightweight building material.

The 2,000 square meter ALS Smart Home consists of 13 smaller modules, each with a floor, walls and roof, which are prefabricated and later on-site at 1116 E. Francis Ave. to be assembled to create the two story property. The Toolbox, a startup innovation center co-founded by Barrett, is currently building the modules.

The project is valued at approximately $ 200,000 based on donations in kind, Barrett said.

“The product comes from the Colville National Forest,” said Vaagen. “This is not only great for an ALS room, but also locally. It came from strains that were thinned out and at great risk of wildfire. “

Vaagen then sent the cross-laminated timber panels to Vestis Systems in the toolbox, where the modules are provided with insulation and cladding.

“We try to do as much as possible in the factory. So when it lands on the construction site, you can just put it together, tie the whole thing together and it can become a livable space very quickly, ”said Vaagen.

The net zero energy house will have daylight, solar panels, an open floor plan on the main level to increase accessibility and family space on the upper floor. This also includes sensors, security functions and smart home controls, some of which are accessible via smartphone, tablet or with eye gauze technology.

Because ALS ‘smart home is designed to be built in modules, it can be easily scaled to meet residents’ needs for more space, said Matt Wild, co-founder of the Matt’s Place Foundation.

“If you just want to expand your home, you can just build a master suite,” he said. “Or you can build the first floor for a couple and if you have kids you can add an upper floor like we did with the Spokane house. So there are many ways in which the parts package can be sent. “

Wild, a Marine Corps. Veteran, diagnosed with ALS in 2015.

Also known as Lou Gehrig’s disease, progressive neurodegenerative disease affects nerve cells in the brain and spinal cord, causing a loss of muscle control needed to move, speak, eat, and breathe. There is no cure for ALS, and the average life expectancy after diagnosis is two to five years, according to the ALS Association.

Wild is one of 20% of patients across the country who have exceeded that expectation and he is eager to make a difference.

Shortly after his diagnosis, Wild and his wife Theresa Whitlock-Wild founded Matt’s Place Foundation, a nonprofit that supports people with ALS and their families. The organization has set itself the goal of providing rent-free, barrier-free apartments to ALS patients and their families.

“Matthew and I were only dating a few months when he was diagnosed with ALS,” said Whitlock-Wild. “It really turned our lives upside down, and the more people I met, the more I saw and wanted to create places where they could ask questions and get answers in a warm environment.

“I just wanted to create a place where families could get the support they need because it’s about more than just medical care,” she said.

“But what they don’t help, and what insurance doesn’t help, is home remodeling, and those are really expensive with ramps and bathroom accessibility conversions,” she said.

“As (ALS patients and their families) learn to deal with the disease, they are also trying to find contractors. Right now the hardware store in Spokane is booming, ”she said. “In 2017, when we built the house in Coeur d’Alene, it was similar. It was just this huge boom that no one had ever seen before. And that’s what we find when these families are diagnosed, they don’t know where to look or how to go about it despite all the challenges of this disease. “

Barrett, entrepreneur and founding member of Blockhouse | Life – the first cross-laminated timber residential development in Spokane – joined the board of directors of the Matt’s Place Foundation in 2017.

“He said, ‘You know, I’m really excited about this new construction technique called cross-laminated timber and let’s see what we can do,'” said Whitlock-Wild. “Andy really brought a lot with him from his network and his relationships.”

More than 40 local companies have provided services, materials, time or material donations to the Spokane ALS smart home project. Some of the companies involved are Baker Construction and Development, the general contractor for the house; Miller Hull architectural firm based in Seattle; Washington Trust Bank; St. Lukes Rehabilitation Institute; and DCI engineers.

“Baker Construction, Matt’s Place and everyone involved are learning to work with cross-laminated timber,” said Barrett.

Since cross laminated timber is a prefabricated material, openings for doors and windows can be pre-cut and added in the factory. Insulation and finishes can also be added prior to installation, resulting in faster assembly on site.

“Because it’s a kit, it can be built quickly,” says Vaagen, adding that Vaagen Timbers completed a cross-laminated timber house near Lake Pend Oreille in about 10 months. “That is the kind of solid wood.”

Barrett estimates the smart home could be ready in February.

The Matt’s Place Foundation’s goal is to build a smart home model that can be replicated and delivered in modules to help needy families across the country, Whitlock-Wild said.

“If we move forward, if someone catches us and says, ‘We have a back yard, but it’s going to cost hundreds of thousands of dollars (to build a house),’ the idea is that we could possibly deliver this to you, so you’re ready to go the build process is much faster and leaner, ”said Whitlock-Wild.

The show continues for live performances in Clark County