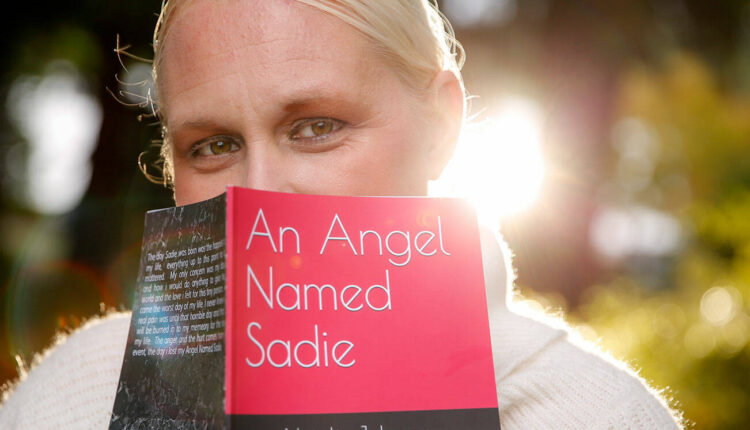 Natalie Johnson lived through the unthinkable – the loss of a child.

The Everett resident is the author of the memoir “An Angel Named Sadie,” an emotionally raw and painfully honest account of how the death of her three-month-old daughter changed her forever.

Johnson was 19 years old when Sadie died in 2000. Twenty-one years later, she is still mourning the loss.

“Ultimately, though, it’s a love story about how a cute little angel named Sadie changed my life,” said Johnson. “(I) spent 15 years quietly writing and rewriting the book, often with tears.”

“An Angel Named Sadie” is a self-portrait of a grieving mother. Johnson recalls the complications of her pregnancy, the joy of the birth of her daughter, Sadie’s devastating death, and continued loss.

Johnson, now 40, has phenylketonuria, also known as PKU, a rare hereditary condition that causes an amino acid called phenylalanine to build up in the blood. PKU is caused by a defect in the gene that helps make the enzyme that is needed to break down phenylalanine.

Failure to follow a special diet that limits phenylalanine can lead to serious health problems.

Johnson was instructed not to have children because babies born to mothers with high phenylalanine levels can have serious consequences. Complications in childbirth can include low birth weight, delayed development, facial deformities, an unusually small head, heart defects, intellectual disability, and behavior problems.

“I was scared when I found out I was pregnant,” she says. “But I was also happy because I always wanted to have a baby.”

She left the fate of her baby to God.

Sadie was born after doctors induced labor 38 weeks after she was pregnant. She was 17½ inches long and weighed 4 pounds, 5.8 ounces. She was diagnosed with a heart defect that required surgery at birth and every five years until Sadie turned 18.

Three months later, Sadie died while Johnson was singing at her best friend’s wedding. Sadie was taken into care by her grandparents and taken to a hospital when they realized she was having trouble breathing. They couldn’t tell Natalie until she got back from the wedding, about three hours after the baby died.

Johnson’s husband encouraged her to finish her memoir. He said it was therapeutic for her.

“I thought it was something she’d have to do to help her heal,” said Dexter Johnson. “And if it helps others in their situation, I thought I would be great too. I was always 110% behind her – ‘Go ahead and write your book.’ ”

As a newlywed, Dexter said he made the mistake of saying “I know how you feel” when Natalie relived the nightmare of losing Sadie. It took years for him to understand her grief.

“She always said to me, ‘No, you don’t know how I feel because you haven’t seen this loss,'” he said. “If you haven’t experienced loss, especially the loss of a child, you may not know how you are feeling.”

Every year the Johnson Sadies celebrate their birthday and commemorate the anniversary of their death.

You have good times and bad. The milestones are the toughest – five years when Sadie would have gone to kindergarten, 10 years when she would have made it into double digits, 18 years for her high school graduation.

For a while she turned to drugs and alcohol to manage the pain. Then she found the self-therapy of writing her memoir.

“Parents are not supposed to bury their children,” said Dexter Johnson, “but so many do it every day.”

While it’s not that common in the United States – around 10,000 children between the ages of 1 and 14 died in 2018 – the terrifying potential for child mortality is great.

Johnson is now a grandmother. Natalie and Dexter have been married for 20 years. Together they raised three children and now have three grandchildren.

Natalie’s mother has not yet found the strength to read the book, but her husband has.

“I’ve learned that she is stronger than she admits and that she relies on me more than I realize,” said Dexter Johnson. “I always thought I was of no help.”

Natalie Johnson hopes her book will help mothers and fathers who also mourn the death of a child.

“It was my chance to give something back,” said Johnson. “Communicating through Sadie’s story that (parents) should never grieve alone … that the pain never goes away, but gets better with time.”

Everett writer Natalie Johnson worked on her memoir for 15 years. Johnson will be reading from “An Angel Named Sadie” via Zoom on October 13th at 6:00 pm. Johnson lost her newborn baby named Sadie when the new mother was only 19 years old. Yours is a grief story – but it’s also about how a three month old child with a flawed heart would change the author’s life forever. Email [email protected] to receive the zoom link.

Sadie was born with a serious heart defect that required an operation. (Kevin Clark / The Herald)

“I quietly wrote and rewritten the book for 15 years, often with tears,” said Natalie Johnson. (Kevin Clark / The Herald)