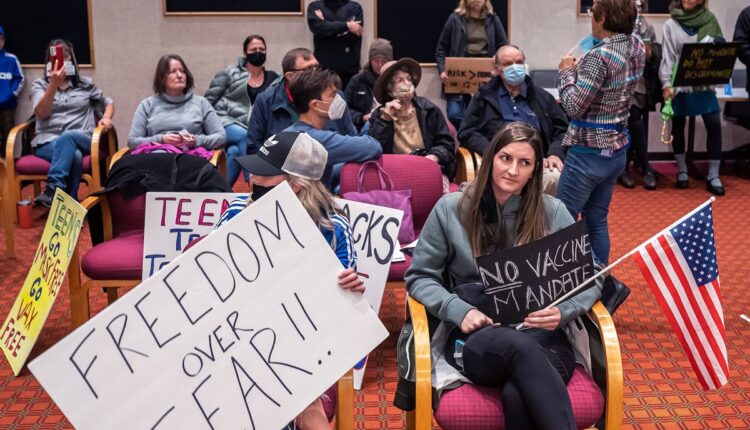 A crowd of exposed protesters belonging to an extreme right-wing anti-government group closed a school board meeting in Portland Tuesday after the group refused to wear masks at the request of the school administration.

The development, which was well documented by journalist Sergio Olmos, follows on from the Portland Public School’s recently announced vaccination mandate for students aged twelve and over – a proposal that the board of directors is due to vote on in mid-November. According to Olmos, the room was reportedly packed to the brim with around 150 people on Tuesday

“Some people have been refused entry because they refused to wear masks. Inside, security has already asked people to keep their masks in the building,” Omos wrote at the beginning of the meeting. Eder Campuzano of The Oregonian reported that “many of the protesters have admitted to being from other counties in Oregon and Vancouver, Washington”.

At some point, according to KGW8, CEO Michelle DePass announced that the meeting would be suspended if the demonstrators refused to put on masks. “I have to see that the mask mandate is kept 100%, or I’ll adjourn,” she said.

But the group refused to comply.

Would you like a daily recap of all the news and comments the salon has to offer? Subscribe to our morning newsletter Crash Course.

“I’m not going to sit down,” shouted a maskless protester wearing a hat that read, “Shoot your local pedophile”. He later called the board members “cowards”.

Administrators reportedly tried to de-escalate but were eventually taken out by security forces and forced to virtually conduct the rest of the meeting. The group of anti-Vaxxers then “moved the chairs in the lobby,” formed a circle around a speaker, and practically held “their own meeting.”

“Call back the board,” they chanted. “Stop the voting!”

“It’s about freedom of choice,” said PPS parent Sonja Feintech, who said she had withdrawn her children from public school and helped organize the break, told the local Fox subsidiary KPTV. “In Oregon we have exceptions. We have philosophical, religious, medical exceptions. That should end. There is no reason a school board should dictate anything.”

Many of the protesters, a cavalcade of parents and concerned locals, are apparently affiliated with the People’s Rights network, an anti-government group founded in 2020 by far-right militant Ammon Bundy. Bundy has been arrested several times in recent years for protesting Idaho State’s mask requirements and stay-at-home orders. His charges included trespassing, resisting arrest, and disrupting legislative hearings. In June of that year, Bundy announced his candidacy for governor of Idaho, claiming he wanted to protect the state from “Joe Biden and those in the Deep State who control him.”

TIED TOGETHER: As the strange story of the “Oregon Standoff” explains what happened in America in 2016

Several students who spoke at the meeting, in turn, supported the vaccination mandate.

“I haven’t spoken to a single student who doesn’t want the mandate. It’s exciting to see students want it and discouraging parents who don’t, but I think what matters is the voice of the students and the students at the end of the day. So I hope the board will vote yes to one mandate, “said Xavier Levine, a senior at Lincoln High School.

“This vaccine is safe, free, and effective, and would protect other students,” said student Lily Stewart.

In recent months, school board meetings have become one of the major cultural battlefields where conservatives across the country have waged a crusade against common sense.

Back in August, a mob of angry anti-maskers in Franklin, Tennessee, reached out to health workers who were leaving a Williamson County school district committee after workers notified attendees of COVID-19 safety measures. And earlier this month, Ohio Senate candidate Josh Mandel was fired from a school committee meeting in Cincinnati after storming into the event to “defend the mothers and fathers” against board members who “played children as pawns in.” used in a political game “.

TIED TOGETHER: The Republican Senate candidate is booted from the Ohio school committee meeting

KHN’s ‘What the Health?’: Biden Social-Spending ‘Framework’ Pulls Back on Key Health Pledges