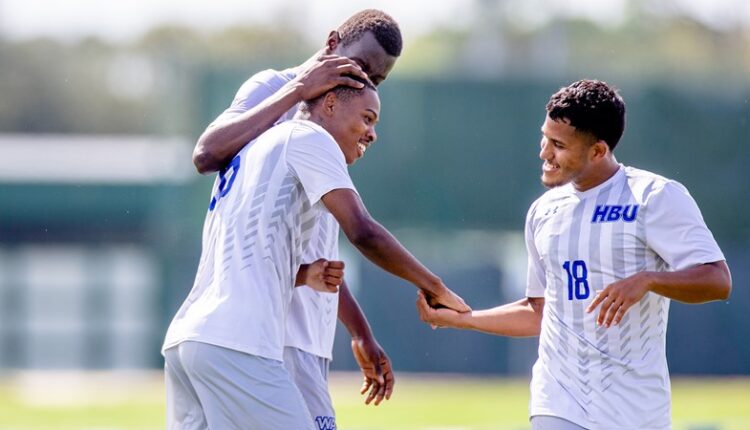 HOUSTON – The HBU men’s soccer team takes to the streets for the last time this season to meet Seattle U on Friday night at 9:00 p.m. and San Jose State on Sunday night at 5:00 p.m.

The Huskies (3-12-0, 1-7-0 WAC) celebrate their first WAC win of the season against Utah Valley on Sunday. Bryant Farkarlun and Kaone Kolagano both came on for the Huskies while CJ Smith tallied his first two assists of the season in the contest. The two assists bring Smith’s season total to 12 to lead the team. Farkarlun’s goal brings his season total to four and is just one goal behind Smith for team leadership. Goalkeeper JP Becerra kept the Wolverines off the board with six saves in the competition, his first goal of the season.

Seattle U (9-7-0, 5-3-0 WAC) comes in after a 3-2 win over UTRGV. The Redhawks are currently in fifth place in the conference and are led by Levonte Johnson, who has met three times and assisted seven times, equating to first place in the WAC. Goalkeeper Akili Kasim is tied for the Conference lead with 64 and has the fourth highest parade rate with 0.753. The Huskies are always 1-7-1 against Seattle U.

San Jose State (8-5-2 6-1-1 WAC) currently ranks third in the WAC and has a three-game winning streak against GCU, UTRGV and UIW behind them. This will be a good test for the Huskies as they have an all-time record of 3-4-2 against the Spartans and have won or drawn in each of the last three games. The Spartans are led by Max Allen, who scored three times and assisted the team six times. Goalkeeper David Sweeney has the third most saves in the conference at 47 and the fifth best savings rate at 0.746.

The Huskies return home for their final game of the season and Senior Night this Saturday when they host Chicago State at Sorrels Field at 7 p.m.