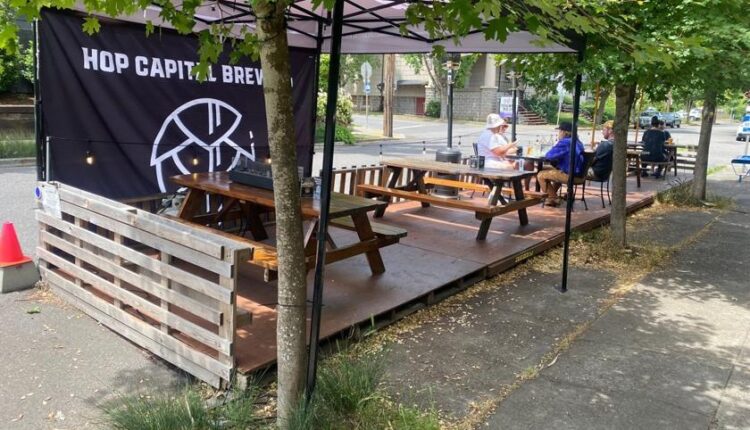 For the past decade, craft beer enthusiasts from Portland and Seattle have made trips to Central Washington to try new and innovative drinks where they’re made.

This fall, two of these Yakima brewers are bringing their drinks to their fans west of the Cascades.

Hop Capital Brewing recently opened a brewpub in the Johns Landing neighborhood of Portland, and Bale Breaker Brewing Co. has partnered with a Wenatchee cidery to open a taproom in the Ballard neighborhood of Seattle.

“It was great, it was busy,” Bale Breaker co-founder Meghann Quinn said of the BBYC taskroom that opened Labor Day weekend. “We were lucky that September had great weather there. We will see how it will be with the rainy season. “

Quinn, husband Kevin Quinn, and brother Kevin Smith opened Bale Breaker in 2013 and have been considering a location west of the Cascades for several years.

Smith’s former colleague Caitlin Braam, who founded Yonder Cider in Wenatchee, contacted the Bale Breaker team and the idea of ​​the BBYC pocket room was born.

“She worked with my younger brother, so we’ve known her for years,” said Meghann Quinn of Braam. “Since our beer focuses on showcasing the best of our local ingredients, working with Yonder Cider was an easy decision.

“We’re bringing the hops from Yakima, they bring the apples from Wenatchee, and we’re going to bring the best of East Washington to the west.”

“When we launched Yonder, we dreamed of a taproom, but that is beyond our wildest dreams,” said Braam. “By joining forces with Bale Breaker, we can offer our customers the complete craft beverage experience.

“I was lucky enough to be able to call the founders of Bale Breaker friends for almost my entire career and couldn’t think of better partners for this exciting project.”

With the idea for a common taproom, two further steps were necessary. The first was finding a location, and Populuxe Brewing’s former home at 826 NW 49th St. offered space in Ballard’s Brewing District that spanned more than 6,200 square feet of outdoor space.

The location has two bars, a rotating list of food trucks, and outdoor fire pits for beverage connoisseurs to enjoy seasonal and special releases from both brands, along with the on-site small-batch production of Bale Breaker and Yonder. There are 16 taps for everyone in the BBYC Taproom.

Quinn said the neighborhood northwest of downtown Seattle generates a lot of through traffic due to its numerous breweries and also attracts customers who have either enjoyed Bale Breaker’s beer list in Yakima or delivered to Seattle.

“About 40 percent of our beers in Seattle are sold through our distributors,” she added. “And all summer long, a lot of people from the West Side visit us in our Yakima taproom (at Birchfield Road 1801). They are very excited that some of our unique offers are now available in Seattle. “

The second part of realizing the BBYC tasn room was to bypass a legal formality: Cideries (classified as wineries) and breweries are not allowed to share a tasting room under Washington law.

However, a law passed in June 2020 allows distilleries to share their tasting rooms with wineries and breweries … so Bale Breaker and Yonder Cidery have joined forces to create a distillery that will act as a research and development company for spirits made with products from the two Quinn brands . produced are called.

A similar undertaking was undertaken by Hop Capital Brewing, which opened its brewpub at 6500 Virginia Ave. earlier this year. opened in the southwestern Portland John’s Landing neighborhood.

Johnathon Thomas, co-owner of Hop Capital, a former Portland resident, noted that when one of his favorite Portland restaurants closed in January due to COVID-19 troubles, he and his wife Aimee Quast were working with the owners of the site.

They worked with the guest chefs at @pnqeatery to bring their craft beer to Portland and pair it with a great menu, said Thomas.

“We worked to create the perfect outdoor dining area in Portland with locally made beers,” he wrote on Hop Capital’s Facebook page. “The pandemic has been a roller coaster ride for all small businesses, especially the food industry. We appreciate each of our guests. “

Hop Capital Brewing, named for the Yakima Valley’s status as the world’s hop production capital, was bought by Thomas and Quast in 2017; the business was formerly known as Yakima Craft Brewing Co. The Yakima Brewery and taproom are located at 2920 River Road; More information is available at www.hopcapitalbrewing.com.