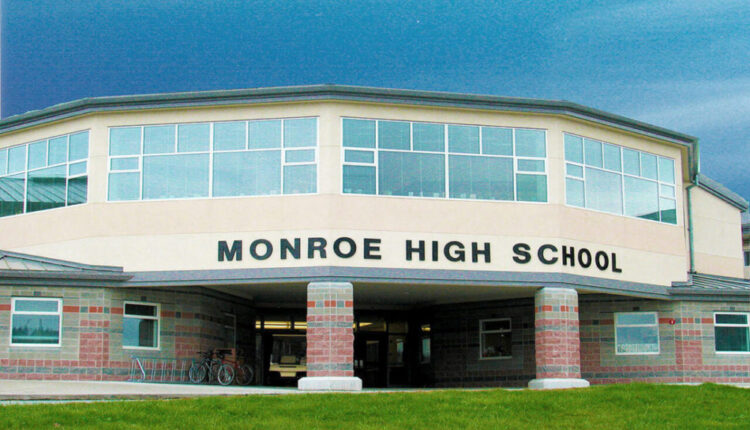 MONROE – Police and school administrators are grappling with an apparent hate crime and an increase in incidents of racism and anti-LGBTQ discrimination at Monroe High School, located about forty minutes northeast of downtown Seattle.

The last incident happened last week just before lunch in the school parking lot. Cell phone footage circulated on Snapchat, TikTok, and Instagram showed a white student repeatedly calling a black student the N word in a confrontation, and at one point the white student hit the black student on the head with a plastic water bottle.

Monroe police spokesman Commander Paul Ryan told the media that the confrontation was brief and that a student tried to de-escalate it before the school’s resource officer intervened.

“It is with great sadness that I write to you to inform you of an incident that took place today at Monroe High School and which involved racial abuse and aggression against a black / African American student,” Wille wrote. “This incident occurred during lunch in the parking lot and was watched, videotaped, and possibly shared on social media by a handful of other students. It also resulted in an additional police presence on campus and we are working with law enforcement agencies to investigate this incident. “

In an open letter to the community last Friday, the Superintendent of the Monroe Schools District, Dr. Justin Blasko:

“I am writing to you today in response to a recent incident of racial harassment and assault on a black student at Monroe High School. We are devastated that hatred and intolerance have manifested in our school district. We recognize that this incident is causing our underrepresented and traditionally marginalized students and families to feel anxious and angry and to question their own sense of belonging to our school community. My heart goes out to these students and families, and I make a commitment that we will continue to learn and grow together as a system. “

Blasko then quoted the district’s politics; “The Monroe School District will provide equal educational opportunities and treatment for all students in all aspects of the academic and activity program, without discrimination based on race, religion, creed, color, national origin, age, honorable veteran or military status, gender, sexual orientation, Gender expression or identity, marital status, the presence of a sensory, mental or physical disability, or the use of a trained handler or companion by a person with a disability. “

He added: “These words are meaningless unless the reality of our environment reflects anti-discrimination. This week’s incident shows that we must continue to come together to learn, grow, and commit ourselves as a community to do better. “

However, according to the Daily Herald;

Racism is a constant issue in Monroe schools. A survey by the student-run Monroe Inclusion Collective found that of 89 respondents, over 57% had experienced racism in the district. Similar numbers reported anti-LGBTQ + discrimination or sexism.

These incidents were most likely outside of the classroom, but on school grounds, as was the case with the most recent episode. And almost 82% of those surveyed said they did not share their experiences with the school management. Their reasons included a lack of trust in employees and a lack of representation in management.

Again, of those who reported racism or other forms of discrimination, almost 82% said they did not feel safe afterwards.

Students presented the results of the survey to the Monroe School District Board last January.

Melanie Ryan, chairman of the board of directors of the Monroe Equity Council, told the newspaper

“All of these students and their families have consistently raised issues of bullying and harassment and various types of incidents that the county simply did not adequately handle,” he said.

“Ultimately, what will determine whether or not we progress will likely be the students themselves,” said Ryan. “Students will have a strong ability within this system to apply pressure to say that we no longer accept this.”