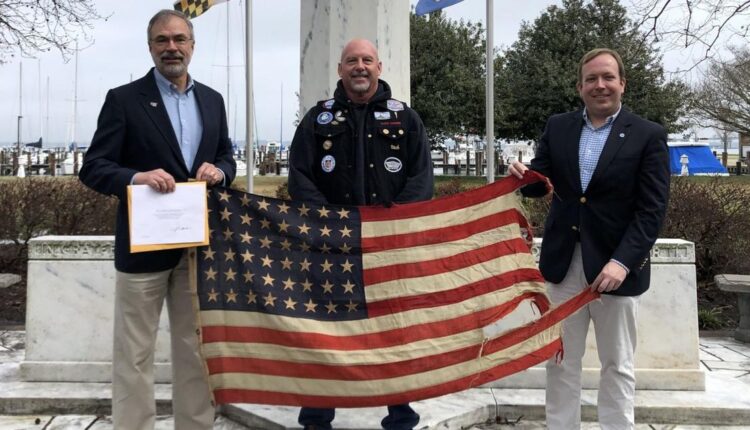 CAMBRIDGE – A battle flag that flew over a warship during World War II and was brought to East New Market by a seaman was recently flown over the Capitol.

A native of East New Market, Harry E. Parker Jr. was the senior officer (second highest rank) of a U.S. Navy Landing Ship Tank (LST) in the Pacific theater when the now aged and torn ensign was blown off the mast.

Parker, who served on the LST-466 and two other warships, one of which he commanded, returned the flag to his hometown at the end of the war.

With the flag, Parker found a letter his father had sent to the Navy Department in 1949 listing the three ships and looking for information on which he had served. One of the ship’s names was obscured by damage over time, but the names of the LST-466 and LST-329 were visible.

Parker began to think about the future of the flag and whether it could be flown over other historical sites.

Parker said he wrote a letter to the White House asking if he would like to fly the flag there briefly and received a letter signed by President Obama “commending veterans and wishing them well” when he struggled with the battle flag.

Since 2015, the flag has been hoisted over more than 20 historic sites including Fort McHenry in Baltimore, the Tomb of the Unknown Soldier, and the battleship USS Wisconsin during a seaman’s reinstatement (based on that seaman’s special request). It also flown over the only existing LST, the LST-325.

The flag of LST-466 was flown on the memorial above the submerged wreck of the battleship USS Arizona in Pearl Harbor on the 75th anniversary of the infamous attack of December 7, 1941. The flag was hoisted at 7:45 a.m. when the attack began on that fateful day in 1941. On the same day, the flag was also hoisted over the USS Missouri, the ship on which Japanese officials signed surrender documents on September 2. 1941.

The flag was last adopted by the office of US Representative Andy Harris, R-Md.-1st.

“The flag has really taken on a life of its own,” said Parker, who hopes to hoist the flag over a battlefield cemetery in Europe before flying one last time in the South Pacific, where it began its journey.

Construction of the LST-466 began on October 12, 1942 in Vancouver, Washington, and the 328-foot ship was launched on November 18 of that year. The ship entered service on March 1, 1943 and was sent to the Asia-Pacific theater as part of the LST Flotilla Seven.

LST ships beached their prows during amphibious landings and opened large bow doors to disembark armored vehicles and men. During the war, LST-466 received seven battle stars for major landings during General Douglas McArthur’s south advance westward across the South Pacific. An unknown number certainly occurred during the time the elder Parker was serving on board.

The elder Parker grew up in East New Market and returned to live on Academy Street. His first war duty was to serve as a navigational officer on an unknown ship.

Before the end of the war, he was given command of his own ship, the LST-329, and sailed from New Orleans across the Gulf of Mexico to the Pacific, where it was hit by a tug moving barges. The ship returned to New Orleans for repairs, where it was when Japan surrendered.

“The flag is meant to honor all veterans of all wars,” said the younger Parker. “Veterans need to know that they are valued.”

“This flag has come a long way,” said Parker’s grandson, David Carrier, upon receiving the flag from Harris. Carrier pointed out the repairs that had been made to the flag on board the ship during the war.

When the flag’s journey is complete, Parker plans to offer it to the Smithsonian. “I don’t know of any flag that has that kind of story,” he said.

No swimming at Seattle’s Golden Gardens after sewage spill