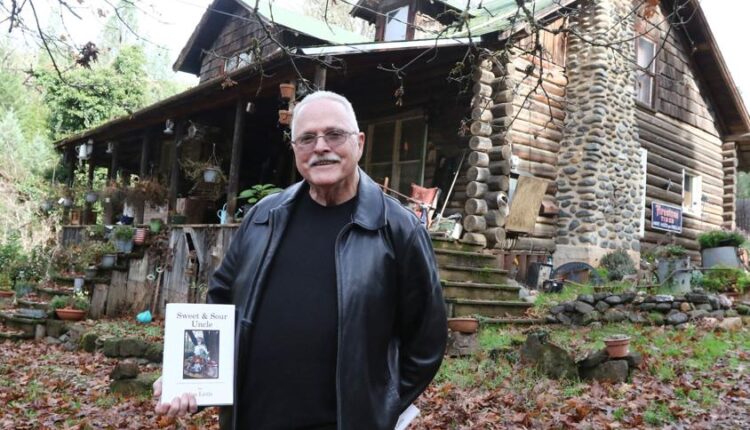 Ralph Little built a log cabin for his wife in Days Creek.

But Freda Little betrayed her husband, ran away with a childhood sweetheart and longed for her for almost 30 years before finally winning her back.

Then, six months after she remarried, she was diagnosed with Parkinson’s disease.

These are some of the life stories of Ralph Little as told in a biography of his nephew Jim Little from Roseburg, a Navy veteran who lives in Roseburg and is the past president of the Douglas County Veterans Forum.

“Sweet and Sour Uncle” was recently published in both paperback and hardcover by Book Locker.

“I call it ‘Sweet and Sour Uncle’ because we had sweet and sour times with him,” said Jim Little, who was caring for Ralph Little with his wife, Carmen Little, when he disappeared with dementia after his wife’s death.

Ralph Little was born in 1908 and grew up on a cattle ranch in Kansas. He was the oldest boy in the family and became the master of the house after his own father left the family.

After the family lost the ranch, he moved to California and then to Douglas County, where he fell in love with a Days Creek school teacher named Freda White.

Freda White had traveled to Oregon in a covered wagon around the turn of the century.

As a condition of their marriage, Ralph promised to build a house on her father Fred White’s homestead on Days Creek Cutoff Road.

In 1941 Freda and Ralph married. At that time the Second World War had started. Ralph Little was not drafted because of a hernia, but the couple moved to Vancouver, Washington, where he worked in the shipyards during the war.

They returned to Days Creek after the war. Ralph built the promised house, a log cabin with beautiful gnarled pine interiors, without a single power tool. The logs were pulled from the forest by horses, and Fred White and Ralph Little built the house by hand.

It still stands on the property today and pictures of it are in “Sweet and Sour Uncle”.

Ralph was one of the founders of Umpqua Bank. Along with other members of the Masons, he put $ 50 in a hat to open a bank above the Masonic building in Canyonville. They were fed up with driving all the way to Myrtle Creek to the shore, said Jim Little. Today it is a multi-state bank.

In the early 1950s, Freda fell in love with an old childhood sweetheart. The Littles divorced and she married the other man.

Ralph longed for her for the next three decades.

“All he could think of was getting her back,” said Jim Little.

Ralph started a hamburger shop called Ralph’s Cafe in Days Creek. Jim Little believes he did this mainly to see his ex-wife go to work every day at Days Creek one-room school.

Once Ralph got into a fist fight with Freda’s husband, who is not mentioned in the book.

When they went before the judge, he told Ralph that he was going to pay him a $ 25 fine. Ralph said if he had known that was all he would have “got more of my monetary value,” said Jim Little.

“What goes around comes around and Aunt Freda’s husband cheated on her,” said Jim Little. “So they got divorced and Uncle Ralph immediately started courting her.”

Eventually, after 30 years of separation, the couple remarried. Ralph was 73 years old and Freda was 76.

“She was diagnosed with Parkinson’s disease no more than six months after they got married,” said Jim Little.

“Very quickly she became completely bedridden from a walking stick to a walker to a wheelchair,” he said.

In this log cabin that he had built for her, Ralph Little cared for his bride for another 13 years before she died.

During this time, Jim Little, who had retired from a long marine career, moved to Coos Bay.

After Freda died, Jim and Carmen Little took care of Ralph, who had dementia and had never had children.

That’s why he wrote the book, he said.

“I admired him for his honesty, his work ethic. If he said something, you could count on it to be true,” said Little.

One of the greatest challenges was his insistence on driving. He had lost his driver’s license due to macular degeneration, but continued to drive despite the visual impairment.

He started carrying a rifle in his car and became hostile.

“He said, ‘If a cop stops me, I know how to shoot.’ That horrified me, “said Jim Little.

One day he would accuse family members of robbing him and appear normal the next day.

“We feared hearing the phone ring because we didn’t know if it would be our happy, happy uncle or some madman’s banter and romp,” Little said.

Public Opinion Is Unified on Lowering Drug Prices. Why Are Leaders Settling for Less?