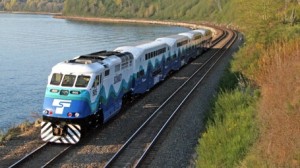 There hasn’t been a slide yet, but given the heavy rain forecast, Sound Transit made the following announcement on Thursday evening.

The N-Line service will be suspended for Friday, November 12th as a precaution due to the expected high levels of rainfall in the forecast with potential for landslide activity.

Passengers are encouraged to use existing scheduled bus services as an alternative to train services on the N Line between Everett and Seattle.