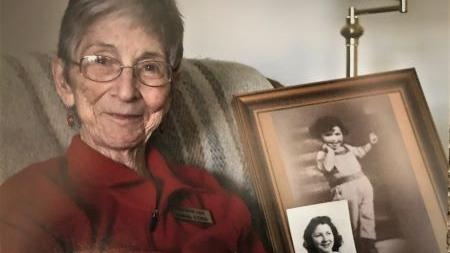 Ramona Stover was born Ramona C. Coleman, daughter of Cathryn A. Coleman of Vancouver, Washington, and Frank A’Hearn of Golden, Colorado, at the White Shield Home in Portland, Oregon. Ramona was raised by her maternal grandparents, Christian and Josephine Coleman, of Vancouver for the first five years of her life. After Christian’s death, she was brought back to her mother and marked the beginning of a turbulent, stormy life that included a year in foster families and several years in labor camps on the west coast. Ramona emancipated herself at the age of 14 to allow herself a better life. She was living in the Oregon City area at the time and was connected to Paul and Anna Chambers with the help of the Dean of Women at Oregon City High School and became their nanny, who worked for her room and board while attending high school and help them organize their growing family. The Chambers family welcomed and nurtured her in many ways, including and preparing her for it, including the idea that she could attend college. Ramona graduated from Oregon City High School in 1942.

She became interested in enrolling in the OSC after attending a dance at the Jantzen Beach Pavilion where the Oregon State College (OSC) student body president gave a recruiting presentation. Paul had a cousin, Rev. Wilbur Simmons, who served as pastor in the 1st Federated Church of Corvallis. Paul persuaded Wilbur and his wife Nell to take Ramona in as a nanny for their two boys and to help her succeed as a student at the OSC. Again she became part of the Simmons family and was loved and promoted to success as a student.