Port of Seattle Speeds Up Decarbonization Plans by 10 Years 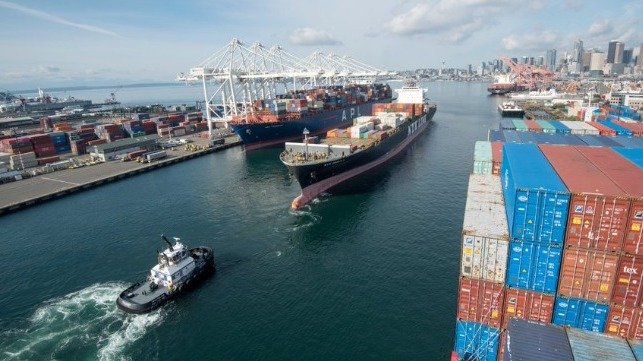 The Port of Seattle Commission has decided to accelerate its carbon reduction efforts by ten years and is now aiming to achieve net zero emissions from its own operations by 2040 or better carbon neutral by 2050.

The policy guidelines were timed to coincide with the Conference of the Parties 26 (COP 26) meeting in Scotland. “The urgency of climate action is underscored by the recent statement by the UN Secretary-General that the effects of climate change are a code red for humanity,” said Fred Felleman, President of the Port of Seattle Commission. “As a public port, these investments are not only right, they also give us a competitive advantage, as companies are increasingly looking for ways to reduce their emissions.”

The port also highlighted its participation in new exploratory studies on renewable hydrogen as a marine fuel; a new partnership with Seattle City Light (SCL) and the Northwest Seaport Alliance (NWSA) to focus on waterfront electrification; and his membership in the Getting to Zero coalition.

“These improvements came because our community wanted them. Local residents, workers and business owners urged us to accelerate our efforts to combat climate change, and the port staff and management took these concerns seriously. As a result, the Port of Seattle’s maritime climate and air action plan is better, ”said Ryan Calkins, commissioner for the Port of Seattle.

The Port of Seattle is already making headway. A new inventory for 2020 found that greenhouse gas emissions from port-controlled sources fell by 20 percent over the past year. While the COVID-19 slowdown had an impact, the increased use of low-carbon fuels and clean electricity was responsible for the majority (60 percent) of the emissions decrease.

The port says it is involved in a new energy plan with Seattle City Light (SCL), the NWSA and industrial partners. It’s well on its way to being completed by the end of next year, and it will provide a roadmap for the clean energy infrastructure and sources of energy needed to decarbonize Seattle’s maritime industry by 2050.

The port is also participating in two regional studies to assess the potential role of renewable hydrogen – among other potential fuels – as an emerging zero-emission energy source for maritime industrial applications.

The Commission will vote on a more detailed regional plan to reduce seaport-related emissions on November 16. This envisages reducing maritime emissions by 50 percent by 2030 and phasing out all maritime emissions in the port (including tenants and port users) by 2050.