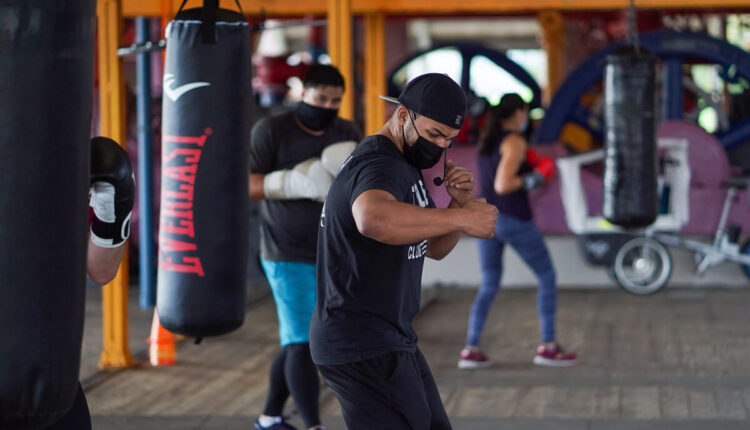 In the midst of the bars, coffee, shops, and eateries that line both sides of Market Street in Ballard, is Nomad Boxing Club. On my first visit, it felt like I had been transported right back to South Seattle. That’s because Manuel “Coach Manny” Dunham, the founder of Nomad Boxing, is carrying on the legacy of South Seattle’s local boxing legend Willie “Bumblebee” Briscoray. Dunham, who had an impressive amateur boxing career, highlighted by a record of 56–14, three Pacific Northwest Championships, and a Golden Gloves win, was one of the last prospects to train with Briscoray.

“Me and Coach Bumblebee, we have one of those Mike Tyson, Cus D’Amato relationships,” Dunham says. “I lived with him for seven, almost eight years. We would stay up all night and we would watch different videos of fights, breaking down footwork and head movements … He was a tough dude. I saw how he trained people and the impact he had on their lives. I wanted to make sure I was able to pass on the torch. Out of everyone at that gym, I was the last protégé, I was the last champion. He told me he wanted me to take over the legacy.”

Originally,  Dunham is from Fairbanks, Alaska. He has 14 brothers and sisters, all of whom were introduced to boxing by their mother, who was herself a boxer, at very young ages. When Dunham was about 12 years old, he met a boxer named Eddie Johnson that planted the seeds that would eventually lead Dunham to Seattle.

“[Johnson] was so fast,” Dunham says. “He would throw punches and all you would see is like a shoulder shrug and the other guy’s head would snap back.” When Dunham asked who trained him, Johnson said Coach Bumblebee in Seattle.

For the next few years, Dunham continued to train. He recalls working at a warehouse and making his own heavy bag out of unused items he found, and creating a homemade gym in the warehouse’s basement, where he would work out on his break times. But he kept saving and planning for a chance to come to Seattle and train in Briscoray’s gym.

When Dunham was 17, he finally found an opportunity to come to Seattle. “I moved out here literally with two days’ notice. I came with one bag, and Coach B got me set up with my first job at Big O’ Tires. I lasted about 20 minutes. I didn’t know nothing about cars back then.”

Before you move on to the next story …
Please consider that the article you just read was made possible by the generous financial support of donors and sponsors. The Emerald is a BIPOC-led nonprofit news outlet with the mission of offering a wider lens of our region’s most diverse, least affluent, and woefully under-reported communities. Please consider making a one-time gift or, better yet, joining our Rainmaker Family by becoming a monthly donor. Your support will help provide fair pay for our journalists and enable them to continue writing the important stories that offer relevant news, information, and analysis.
Support the Emerald!