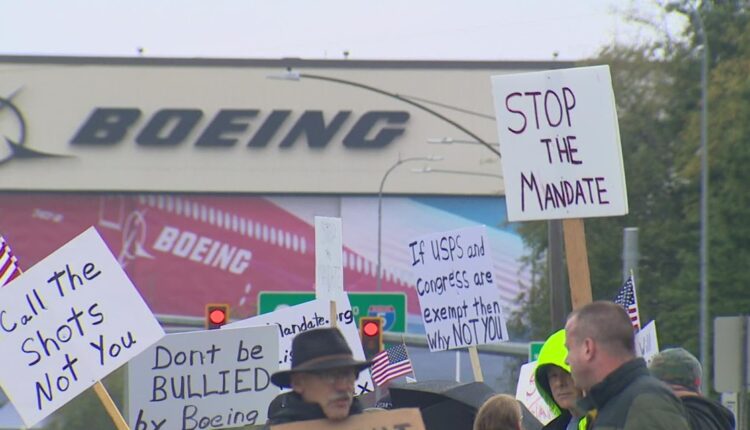 Boeing employees must be fully vaccinated against COVID-19 on December 8th or risk losing their jobs.

They demonstrated in a rainy, loud rally in front of the aircraft manufacturer’s plant in Everett, defiantly demanding an end to the mandate.

In some cases, entire families said they would quit their jobs instead of following the demands.

“This is not the place for government or anyone else to push this through on anyone,” said Bernadette Kennedy, who has five siblings who work for Boeing.

Emily Kennedy’s husband has worked for the Boeing Company for 11 years. The couple have a four year old daughter, Flora.

Emily Kennedy’s husband has been with the company for 11 years. The couple are now battling a vaccine they don’t believe in, even if it means they’ll lose the stability of a Boeing paycheck backing them and their four-year-old daughter.

“I supported him. I support him now. I will support him if he loses his job,” said Emily Kennedy.

Boeing has 125,000 employees, including around 57,000 in the Puget Sound region. These employees must now be fully vaccinated against COVID-19 on December 8th or risk losing their jobs. Boeing said employees can apply for an exemption based on “a disability or a righteous religious belief”.

Anyone who receives an exemption must undergo “frequent tests for COVID-19” and be prepared to present a negative test result on request.

However, some workers were even skeptical about this.

“How you do that is another question and whether you will work with us,” said a young worker at the demonstration, who would only identify himself as David G. “The only information we get is the news, or Instagram. They don’t tell us anything.”

How many of the Everett protesters are actually willing to risk their livelihood remains to be seen, but the Kennedys said they are not giving in.

“I told my husband that I would be with him,” added Emily Kennedy. “We don’t get a vaccine either.”

KING 5 asked Boeing to comment on the protests on Friday. The company made the following statement: “Boeing is committed to maintaining a safe work environment for our employees.

Next Saturday to the Kleman Plaza