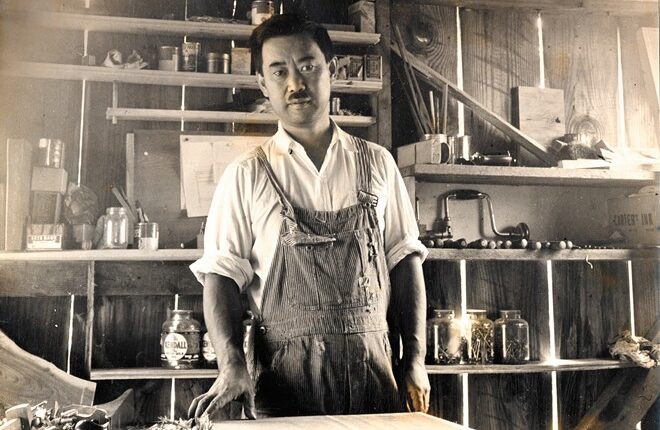 Courtesy of the Nakashima Foundation for Peace

Spokane born George Nakashima in his New Hope, Pennsylvania shop in the 1940s.

Most Spokane locals grow up camping, hiking through local wildlife sanctuaries, and swimming on the Little Spokane River, but I didn’t enter Riverside State Park until I was nearly 22 years old.

In June 2020 I began to feel the itchiness of captivity. I hadn’t worked, went to school or anywhere. I would walk around until I inevitably decided to lie down again and keep scrolling through various social media outlets. My houseplants thrived in the sunlight my window offered, but I didn’t.

My disorganized bookshelf, which contained one too many hardcover copies of my favorite middle school book, stared at me from the corner of my room. I sorted the shelves and pulled out every book I thought I might feel connected to the outside world.

Thoreau’s Walden was a classic that I was dying to get through. I thought Peter Wohlleben’s The Secret Life of Trees would help me imagine I was back in the real world.

In July, I braved the outside world to browse the shelves of a Barnes & Noble. I came across a book called The Soul of a Tree: A Woodworker’s Reflections by George Nakashima.

After devouring the book one afternoon, I flipped back to the sketches I’d seen earlier for a closer look. Wildflowers, hills and trees as I had always seen them in my daily life – familiar. Nakashima studied architecture at the University of Washington and was interned during World War II. I also learned that like me, Nakashima was born in Spokane.

During his imprisonment at Camp Minidoka in Hunt, Idaho, Nakashima learned woodworking from a Japanese compatriot from Japan. He taught him the Japanese carpentry and joinery art and the patience that is associated with the craft. From then on, Nakashima devoted his life to woodworking.

After he was released from Camp Minidoka, he made New Hope, Pennsylvania, the headquarters of George Nakashima Woodworkers in the late 1940s, and in August 2020 I happened to be driving through New Hope on a road trip.

Even from the passenger side of a Chevy Cruze, I realized why Nakashima so adored New Hope. The highways are surrounded by lush greenery, the sky is blue, and fresh air pours out of my window, making me take deep breaths as often as possible.

Nakashima connected to every piece of wood he used in his work – he believed every piece of furniture he made contained a story, and as I looked at the trees around me, I couldn’t help but agree.

When I got home, I leafed through my now-worn copy of Nakashima’s book. I noticed a quote that I had highlighted at the front: “It is a land where a young heart can explore the meaning of existence.”

Nakashima’s description of PNW made me realize that I had never really appreciated the beauty of my hometown. His love for nature sparked my own admiration for nature, which until then had been hiding. Spokane has a lot going for it when it comes to enjoying the natural beauty, but the thought that I have never explored this part of my hometown makes me incredulous.

Nakashima’s formative years in Washington influenced his outlook on life until his death in 1990. When I watch the sun set through the pine trees overlooking downtown Spokane, I am grateful that he opened my eyes to the meaning of my own existence at a time opened where I needed it most. ♦