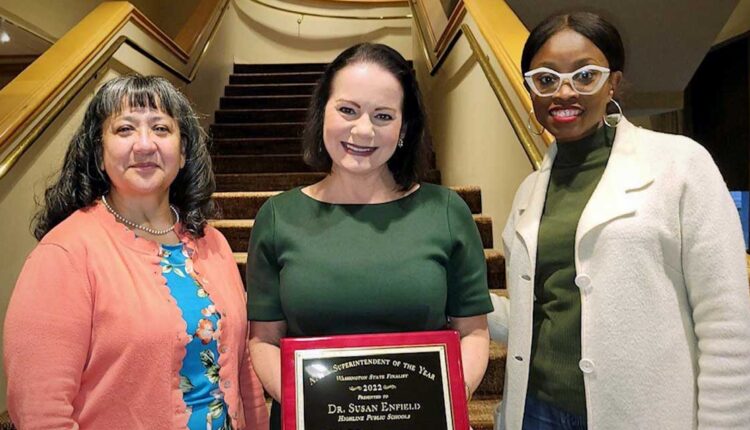 Highline Public Schools Superintendent Susan Enfield has been named Superintendent of 2022 by the Washington Association of School Administrators (WASA).

“Since 2012, when Dr. Enfield has been named superintendent of the Highline Public Schools, she has consistently and relentlessly focused on achieving more equitable outcomes for all students in the district, ”said Joel Aune, Executive Director of WASA. “By developing a strategic plan that includes a bold vision for all students, there is a system-wide commitment to justice that includes the elimination of racism, racial and other identity inequalities, and institutional prejudice.”

Dr. Enfield accepted the award on Friday morning (November 19, 2021) at WASA’s fall superintendent meeting in Bellevue. She thanked for this recognition not only for herself, but for the entire highline community.

“District leadership is a team sport, and we have the best team in highline public schools,” said Enfield. “While this award is for Superintendent of the Year, I really see it as a celebration of the school district and ward of the year, and that is highline to me. It is a privilege to live, lead and serve here, and I am grateful for this honor. “

The award is designed to recognize the outstanding leadership of active frontline superintendents and pay tribute to those who run Washington’s public schools. Dr. Enfield is currently serving in her 10th and senior years in highline public schools. She announced last June that she would be leaving Highline by the end of this school year.

“I am so grateful for Dr. Enfield’s leadership and everything we’ve achieved together over the past nearly 10 years, ”said School Board President Angelica Alvarez. “We are sad to see that she left Highline, but we understand that it is time to share her leadership and vision with another happy community.”

Dr. Enfield joined Highline in 2012. Prior to Highline, she served as a director in the Office of Teaching and Learning and assistant superintendent in Portland and Vancouver, Washington, and later as chief academic officer and interim superintendent for the Seattle Public School District.

In addition to this educational experience, Dr. Enfield served on or on the College Board; Board of Directors of Code.org; Editorial projects in the education council; and Digital Promise League of Innovative Schools Advisory Committee. She held leadership positions on the Highline Schools Foundation Board; Board of Trustees of the Highline Hospital; and United Way of King County.

This morning @wasa_oly named Highline Superintendent Susan Enfield Superintendent of the Year! We are so proud of the impact @SuptEnfield has made on our community and won this well deserved award !!
(Masks have been temporarily removed for the picture) #HighlineProud pic.twitter.com/98RfpnXTVJ

Should you get a booster shot? Experts say it’s time – Everett Post