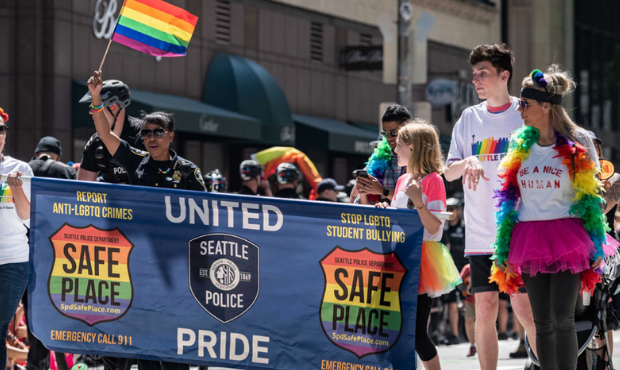 The LGBTQ community demands tolerance and acceptance, but offers little of it at the Pride events in June.

Capitol Hill Pride prohibits police from attending the Pride march and rally. Seattle Pride, the mainstream parade organizer, is considering a ban. And now two gay officials speak out against this attack on their profession – and their identities.

The actual ban and the potential ban are based on the same misguided anti-police narrative that engulfed the city last year. Somehow, the organizers claim, the lives of the rally goers could be in danger if the police were around. What a nonsense.

On its website, Capitol Hill Pride invited “anyone, LGBTQ and anyone of any orientation, color, background, race, nationality and nonprofit to march in support of diversity and equality.” With one exception: “Except the police!”

Are you an official in the LGBTQ community? Stay away. The organizers only want you if you help arrest a criminal who is committing a crime. Otherwise you are of little value to the community.

“For the safety and courtesy of the LGBTQ and diversity community and the general public, it is our responsibility to present a safe event and create an atmosphere free of fear or harm to members of the community,” said the directors of Capitol Hill Pride Charlette LeFevre and Philip Lipson LeFevre said in an expansive statement. “As such, Capitol Hill Pride announces a ban on police at the event and will continue to urge the police to stay on the perimeter.”

Capitol Hill Pride went with a total ban. But the mainstream Pride organization is considering the same thing.

Seattle Pride is considering its options

Seattle Pride, led by a far-left politician who does not live in Seattle, seeks input from the community before announcing whether they will allow LGBTQ police officers to march. You buy time. They hope there are enough activists to give them a reason to ban officers.

Burien Councilor Krystal Marx presides over Seattle Pride. She is Burien’s version of councilor Kshama Sawant, but with significantly less media experience, vision, awareness and community support. With this type of tour, it’s no wonder they weigh their options for police attendance for next year’s event.

“In the coming year we will take the necessary time for a thoughtful process in which we ask to hear from the people in our community so that our plans reflect them,” Marx told KIRO Nights host Jack Stine. “We can compensate for this with the city’s mandatory requirements, which stipulate a police presence at events of this magnitude. It requires approval, and we want to make sure we can balance both the concerns and the approval requirements. “

An early advocate and apologist for the Capitol Hill Autonomous Zone, Marx is a frequent critic of the police force. It refused to approve a budget, in part because funds went to the Burien PD. She even hopes to bring her marginal views to Congress. Marx announced their challenge to incumbent Democratic Congressman Adam Smith. She will lose.

Proudly brings gay cops “back in the closet”

Seargent Doug Ragusa is a 17-year-old Seattle Police Department veteran and openly gay. He was disgusted when Capitol Hill Pride announced the ban.

“I was shocked. I was incredibly surprised because the Seattle Police Department and the LGBTQ community have had a phenomenal relationship for the nearly 18 years I’ve been with the department,” Ragusa told the Jason Rantz Show on KTTH.

“Seattle is an incredibly progressive city, and I was hoping they would play a leading role,” Ragusa continued.

“I grew up in a small town at a time when I had to be closed, where the main group of people said, ‘To be seen, not to be heard. We don’t need to know anything about it. Keep in the closet and you can get along with us. ‘ Well, essentially, Capitol Hill Pride does just that to us. They just put gay cops back in the closet. “

“It doesn’t suit me well”

King County Sheriff’s Assistant Nic Abts-Olsen was also amazed at the Capitol Hill Pride ban. And he was concerned about Seattle Pride’s reluctance to take a position.

“I’ve been part of that community, and I’m part of the law enforcement community too,” Abts-Olsen told the Jason Rantz Show on KTTH. “Before I worked for the King County Sheriff’s Office, I was part of the Seattle Police Department. I worked on Capitol Hill, so I dealt with this community every day, and outside of work, when my uniform is taken off, I am part of that community. This is how I identify myself in my private life. I am told that I cannot participate this year and that I cannot just be proud of my job in the community I belong to AND that just doesn’t suit me. “

Abts-Olsen is proud of his work in the community. During his time with the SPD, he worked in the eastern district. He worked hard to be a visible part of the neighborhood, to help people when they needed it, and to be a kind face. Community police, he knows, is important.

He has also attended previous Pride events, marched alongside other LGBTQ officials, and said that “it created many opportunities for engagement” and positive relationships.

“I’ve seen these relationships have a positive impact across the board when people report or fall victim to crime, and then I can interact with people on another level,” he said. “Excluding ourselves from these events and reducing this visibility does nothing for police work in the community.”

Does the ban not reflect the position of the community?

Abts-Olsen doesn’t believe the ban is a reflection of what the community thinks of the police. Instead, it is a position put forward by an activist organization that has a political point of view.

“I think the vast majority of the public supports law enforcement,” he said. “I don’t think it necessarily reflects the whole community, but I think it’s pretty specific to this organization.”

If so, why haven’t more members of the LGBTQ community come forward to condemn this ban? He wonders if it’s because people want to avoid strong resistance from activists in the anti-police community.

Turn their backs on gay cops

When a gay official launched the SPD’s Safe Space Initiative, the community celebrated. It was the police who proudly declared their commitment to protecting the LGBTQ community. It was praised as “inclusive”.

“It’s visibly queer, really, in a way I’ve longed for,” said Karyn Schwartz, business owner of Sugarpill, at the time. “To see a kind of representation of yourself that says: ‘You belong here’ – that brings calm to your soul.”

When activists said they wanted more officials to reflect their community, the community celebrated LGBTQ police officers. VICE News has introduced two transgender officers who work in the SPD and the KCSO.

The times have changed. The police appeared to protect the community, only to turn their backs on the gay police force.

Where is the community speaking?

Where is the community pushing back with a single voice to say this is wrong? It is unfortunate to use pride to slander gay cops. A community that claims tolerance and acceptance should not slander their own, even if they think it serves a larger political agenda.

When the community is exposed to hate crimes, victims turn to the police. And that same police agency has members who should be able to reach out to their community for assistance. But instead of being criticized, the move is celebrated by some.

“Banning the police from Pride for the next four years is a bold statement reminiscent of the actions of Seattle CHOP activists,” wrote Lindsey Anderson on the Seattle Gay News.

A bold statement? It’s a hideous statement. One that sends the message that LGBTQ activists are happy to practice the same kind of hateful discrimination that they previously condemned.

“We should celebrate the fact that we have diversity within our law enforcement community and that our law enforcement community reflects the community,” Abts-Olson said. “We don’t all come from the same walks of life, we don’t all have the same political views, we don’t all have the same personal experiences, but as part of the LGBTQ community we should celebrate this law.” Enforcement is part of that, and we stand for it, and I should be proud not only to be gay but also to be a police officer, protecting my community and serving the public every day. ”

Man fatally shot in front of the house in Vancouver | Washington