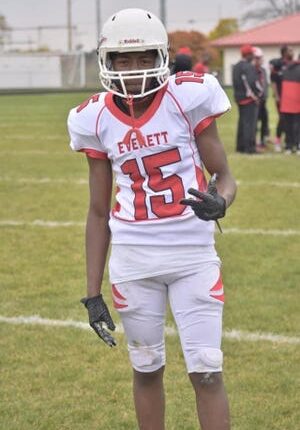 Training for the Everett High School team had just restarted in preparation for the fall season, and Marshawn was thrilled, said girlfriend Sthefany Garcia. He was so excited to get back to the sport he loved.

“He just wanted to play football,” said Sthefany. “All he wanted to do was play.”

Marshawn was killed before his senior year of high school before he could achieve his dreams.

He and 19-year-old Damon Johnson Jr. were shot dead early Monday in a double homicide near Rotary Park in Lansing, police said. No one was arrested in connection with her death.

“This is a nightmare that you can never imagine happening,” said Tanaysha Beard, one of Marshawn’s sisters.

Tanaysha Beard said Marshawn is looking forward to getting his driver’s license. He had just received his permit and she had taken him almost every day.

He was stunned because he had to miss some of the training exercises in football because of the driver training, she said.

Terra Riley-Watson, a mentor and academic trainer at Everett, said she has known Marshawn since playing with the Lansing Area Titans, a youth football league for children through eighth grade.

“Marshawn was shy, he was kind, he was very caring for his family,” said Riley-Watson. “His life goal was to play professional football so that his family could have an extraordinary life. He never said a better life, he always said a great life.”

Marshawn felt his mother was making an excellent life for him, said Riley-Watson. He showered her with love and honored and respected his father, she said.

She said he was respectful, a great friend, a leader, and committed to his school attendance and classwork.

“He lived his life to the fullest,” said Riley-Watson. “We have been blessed as a community and as a family to have him.”

Keora Downell, Marshawn’s cousin, said Marshawn adored his large family and was always ready to babysit for his nieces. When Tanaysha’s daughter was born, he quickly fell in love with her, Tanaysha said.

His bond with his siblings is “unbreakable,” said Downell. He took time to check on his grandparents and loved hanging out with them.

His nickname was “Man-Man” because he was “always a short man and mature beyond his years,” she said.

“Marshawn is a sweetheart, as our grandmother often says,” Downell said. “He’s the little boy in our bunch, and he’s our pride and joy.”

Riley-Watson said she’s working with other organizations across the community to flood the south side of Lansing with activities to keep the kids busy all summer. She doesn’t want other families to have to deal with the pain of losing a child or loved one to gun violence.

“We have to know where they are, we have to keep an eye on them,” she said. “You need to know that they are in our hearts.”

To change things, community resources are needed, Riley-Watson said. And it means changing the culture and climate of the people who live in the city.

“He will be greatly missed, but his life, memory and legacy will be honored and recognized by the Everett Class of 2022,” she said. “This is really a case where you just got caught in the crossfire. And the crossfire has to stop. A truce has to be declared.”

Best Cafes Between Portland and Seattle