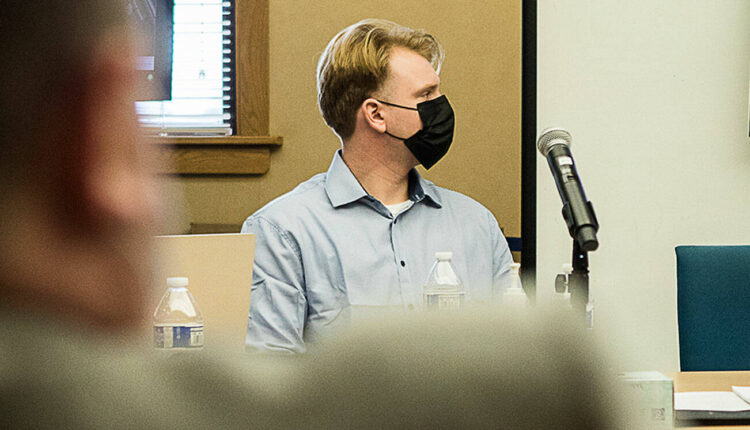 EVERETT – Alejandro Meza was taking the bus to his job as a metal press in Mukilteo on the night shift when he got into an argument with another passenger, his lawyer said.

This week, Meza, 22, of Lake Stevens, was on trial for second degree murder in the death of Gene Peterson, 33, of Everett on a Community Transit bus in March. Defense attorneys argue Meza acted in self-defense.

According to the defendant’s report to the police, the two men got into an argument because Peterson tried to smoke drugs. Meza said Peterson punched him in the face. They fought in the corridor.

Meza said he thought he saw Peterson reaching for something.

An officer asked him what happened next.

“What do you mean?” Meza responded according to the charges. “I (expletive) shot him.”

According to prosecutors and defense lawyers, he also told the police, “I was obviously an (explicit) idiot.”

“You will decide whether or not this is somehow an admission of criminal behavior or just evidence that my client is a person who has empathy, who is not looking for a fight,” Defense attorney Timothy Leary told jurors on Wednesday during his opening address in Snohomish County Superior Court.

Meza took the bus on March 7 because he couldn’t drive: he was diagnosed with epilepsy, Leary said. The defense claimed Meza had a seizure a week earlier. He was aware that drug use could trigger another episode. That triggered the confrontation, according to the defense.

Meza’s family organized an online fundraiser to pay for the Seattle attorney’s legal services and raised over $ 25,000.

The defendant sat in court on Wednesday morning between his lawyers in a light blue shirt with buttons, dark blue pants and a black mask.

After the first 9mm bullet pierced his stomach, Peterson reportedly fell to his knees. With Peterson’s back to him, Meza fired another shot a second later, prosecutors claimed. The second bullet went down into Peterson’s back and through his right lungs and liver.

According to court records, Meza said the first shot was accidental; the second was intentional.

Security footage from the bus showed Peterson’s hands in the moments before Meza waved his gun, according to the prosecution. Peterson is said to have grabbed the hood of Meza’s jacket with his right hand. His left hand was next to his own head.

Meza told police he couldn’t tell where the victim got to. He’s never seen a gun, and Peterson never threatened to use one.

Security footage indicated Peterson was reaching for nothing, prosecutors said. Meza watched the bus video play on multiple large TV screens for the jury on Wednesday. When the police body camera footage showed efforts to save Peterson’s life, Meza looked off into the distance.

“This case is not a thriller,” said Deputy Public Prosecutor Elisabeth Forsyth in front of the jury.

According to Forsyth, the defendant won the fight. He had a gun. Peterson doesn’t.

The jury would have to decide whether someone “can shoot and kill this person and call it self-defense”.

The process is said to take about a week.

Alejandro Meza watches a video of the altercation he had with Gene Peterson on a Community Transit bus during the opening statements of his trial in Everett on Wednesday. (Olivia Vanni / The Herald)

Assistant Attorney Elizabeth Forsyth made opening statements during the Alejandro Meza trial in Everett on Wednesday. (Olivia Vanni / The Herald)