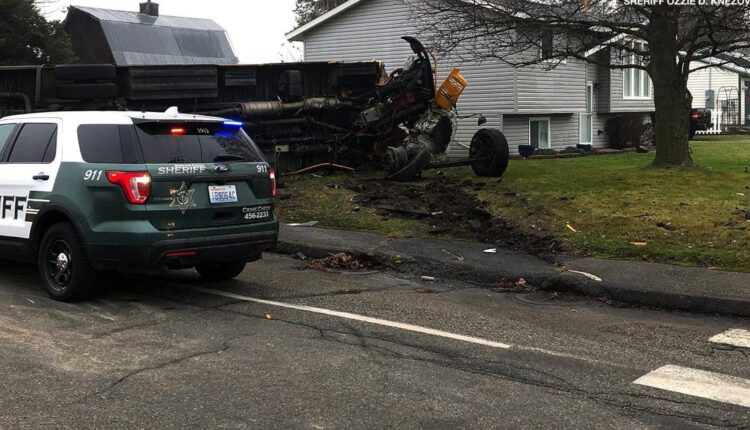 SPOKANE – On the morning of Monday November 22, MPs for the Spokane County Sheriff and Spokane Valley responded to a vehicle accident involving a school bus at the intersection of E. Wellesley and N. Kenney Roads. The bus, which was only occupied by the driver, was thrown on its side after being hit by a BMW that had been reported as stolen.

Deputy Kauffman arrived in the area, and when he arrived at Tiara Ct. While on Queen, he watched an unknown man, later identified as 30-year-old Jeffrey S. Schelin, leaning in the back seat of a white BMW. Deputy Kauffman drove on with Queen and turned while he checked the license plate with shipping. While he waited to return, he watched the BMW turn east on Queen. He started following the BMW and noticed it was turning south on Kenney. When Deputy Kauffman turned on Kenney, he was stopped by an SUV and lost sight of the BMW.

Deputy Kauffman was then informed that the BMW license plate had just been reported as stolen.

Still behind the SUV, Deputy Kauffman approached the Kenney and Wellesley intersection and noticed a school bus lying on its side due to another accident in a courtyard on the southeast corner of the intersection. He used his radio to inform dispatchers and other patrol units about the crash. He contacted the bus driver and learned that there were no children on the bus. Even though the driver appeared unharmed, paramedics were called in.

According to a report by the SCSO, the stolen BMW had penetrated further into the courtyard and crashed through a chain link fence. Several people at the crime scene stated that the driver (Schelin) fled the scene on foot in an easterly direction. Schelin’s description was made available to the responding deputies and Liberty Lake officers who began searching the area, but he could not be located. At the time, Spokane County’s Transportation Department investigators and the Washington State Patrol Troopers were called in to help with the search.

Later that day, around 1:30 p.m., a homeowner at Block 21100 of E. Wellesley called 911 to report that an unidentified man was knocking on her back door and that she believed it might be driver Schelin. acted.

The MPs reacted and arrested Schelin, who was injured in the crash. He was taken to a hospital for further medical treatment.

Schelin was found to be driving at high speed and ignoring a stop sign before plowing the stolen vehicle into the school bus. He hid in a shed in the apartment before attempting to contact the homeowner.

Schelin is charged with possession of a stolen vehicle, second-degree burglary, hit-and-run, reckless driving and driving while in lockdown.

Schelin, who has a long local criminal record, has also been arrested twice in the last two weeks (21.07.21 arrest warrant for 2nd degree burglary, malicious mischief 2nd degree and 11/20/2021 possession of a stolen vehicle) in order to be judged by the courts for his own Dismissed at discretion.