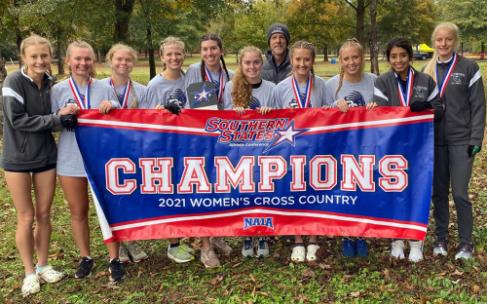 The beginning of November has done three things over the past three years: the leaves on the trees are changing, the Southern States Athletic Conference has its annual cross-country championship race, and the Lady Roadrunners are at the top of the standings.

This year was the toughest fight of all when William Carey (Miss.) Brought her A game to the Oakville Indian Mounds on championship day. It was tight throughout the race as the Roadrunners and Crusaders placed a total of 11 runners in the top 13 of the race.

Individually, Junior Kathryn Vradenburgh won the overall title when she ran away from the field and finished in 18:34 minutes.

She took control of the 1 mile mark and never looked back.

Last year’s SSAC champion, Riley Jo Ford in his sophomore year, finished fourth overall in a time of 19:08. She was almost reaching her winning time from last year, but it would only be 4th place this year. William Carey placed the runners in 2nd, 3rd and 5th in order to stay ahead in the meeting.

But the Roadrunners have a strong backend on their team. The seniors Alex Gass (19:31) and Kay Vradenburgh (19:32) finished the overall standings in 6th and 7th place and separated the Roadrunners from their rivals. Alex ran well throughout the race, while Kay ran hard on the final half mile, overtaking several runners in the process, including her teammate, rookie Giselle Dominguez, who finished important fifth for the Roadrunners at 7:40 p.m., good enough for 10th overall.

Giselle was 7 seconds ahead of William Carey’s newcomer Isabele Wheeler to earn the Newbie of the Year award. She joins Kathryn and Riley from the last two seasons to win this award.

Junior Kate Roberts also finished less than 20 minutes when she crossed the finish line in 12th, just ahead of William Carey’s fifth runner. It was her second consecutive under-20 race.

Freshman Ella Coley was seventh again for Roadrunners (and 17th overall) and set a new personal best of 20:36. She finished the race just 8 seconds ahead of teammate Kayla Mattox, who finished 19th overall. Ella was the third freshman in the race and earned her an all-freshman team honor along with Giselle. Kayla was only 2 seconds away from a new personal best.

Junior Haley Tillery drove her fastest race of the year when she finished 21st overall in a time of 20:57. Junior Rebecca Poe was not far behind and finished 21:19, which was enough for 22nd overall. It was Becca’s second fastest time ever.

This national championship takes place in two weeks on November 19th in Vancouver, Washington. Good luck to our Lady Roadrunners in Washington!