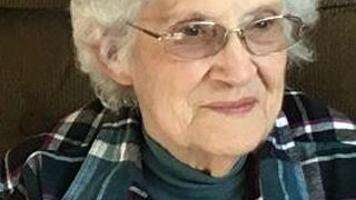 CALEDONIA – The “Greatest Generation” lost a member when Barbara E. Schmidt, 100, passed away peacefully on Thursday, June 17, 2021. Barbara Schmidt (born: Spear) was born on February 11, 1921 as the daughter of Ken and Lillie Spear in Wyocena. Wisconsin. There she spent most of her early life and after graduating from high school, she continued her education at UW-Madison. She married Herman Schmidt on December 15, 1941 and settled in Vancouver, Washington, during World War II. They later moved to Adams, Wisconsin, before finally settling in Racine for the rest of their lives. Barb was in Racine at Oster Mfg. employed, briefly at William Horlick High School and most recently at Twin Disc Inc., which retired in 1986.

Barb enjoyed watching golf, especially when Tiger Woods was playing. She was an avid soccer fan and was always looking for a game to watch on TV. She was a fan of the Wisconsin sports teams, particularly the Brewers, Bucks, Badgers, and Packers. Most of all, Barb enjoyed the activities of her children and grandchildren, attending countless baseball and basketball games, soccer games, and singing performances. She loved working on puzzles, crosswords, and cryptograms. Barb found great joy watching the Game Show channel and was a great competitor when it came to Jeopardy – often he knew answers that the participants didn’t know.