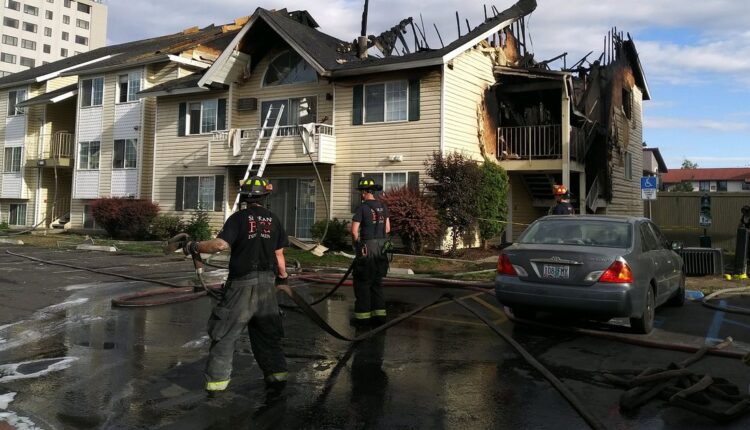 A man was flown to Harborview Medical Center on Saturday after a fire destroyed part of an apartment in northern Spokane.

Julie Oberg, assistant chief of operations for the Spokane Fire Department, said she believed only one man was flown to Seattle.

The fire sent at least seven people to the hospital. A firefighter injured his leg on site but was treated and discharged on Sunday, Oberg said.

Battalion chief and operations commander of the Spokane Fire Department, Michael Bacon, said crews were called to the GoGo Heights apartments near Colton and Wedgewood at around 3:45 p.m. Saturday.

Bacon said he was about 3 miles away at this point and could see a column of black smoke.

“It went well,” he said over the fire.

The fire happened so suddenly that a mother helped two of her children jump out of a third-floor window, Bacon said.

Linda Juitt said in a Facebook post that she was the mother who had to throw her children to people on the ground waiting to catch them.

“By God’s grace, my children walked away without a single scratch !!” wrote Juitt. “Thanks to the neighbors who caught my children.”

Juitt said she never heard of fire alarms going on and that the fire prevented her and her children from taking the stairs to exit the apartment complex.

While her children were unharmed during their three-story jump out of the burning building, Juitt injured his leg. In her Facebook post, Juitt said she was hospitalized for the injury.

Randall Harris, Juitt’s friend, wrote in a Facebook donation that Juitt broke a handful of bones jumping off the third floor.

Juitt asks for donations after losing her belongings in the fire. The Facebook fundraiser that Harris started on Sunday had raised $ 445 by 5 p.m.

“Yes, we have lost everything, but all of these things are replaceable,” said Juitt in her post. “I am so grateful to God that he watches over us and protects us.”

The cause of the fire is being investigated.