100 years ago in Spokane: The circus acts of 1921 probably wouldn’t have been allowed today 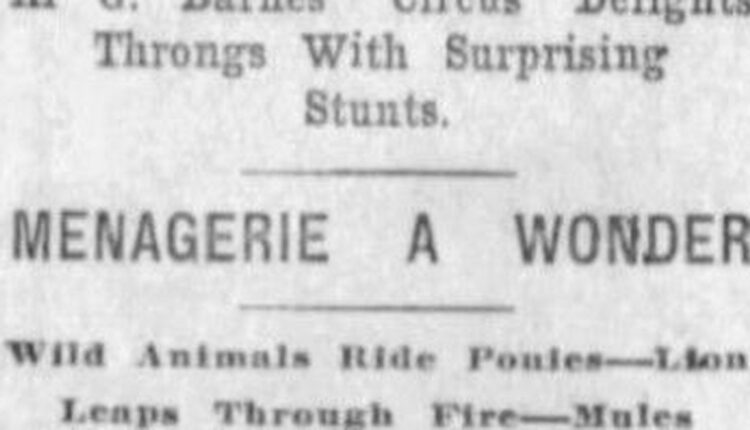 The Al G. Barnes Circus was in town, and unlike most other circuses, the main shows consisted almost entirely of pet shops.

“The rings were constantly filled with animal actors, from growling lions to fancy jazz and drunken ponies.”

“In the end, all of the riders and performing ponies came out and drifted into the band, trotting foxes and one step in time,” wrote The Spokesman Review. “A worldly wise horse apparently found a way to overcome the 18th Amendment (Prohibition) because he swayed and swayed like it was 4 a.m. and made his way home.”

Lions, pumas, tigers, llamas, polar bears, hippos, seals, monkeys and camels also stepped through the three rings of the circus. The elephants, however, were the big show dealers.

“Of course the trainer was putting her life at risk while the largest of all elephants pretended to lie on her, but not close enough to flatten her,” wrote the correspondent. “The climax of this particular act came when one of the great pachyderms grabbed the pony’s harness between its jaws and quietly walked away with the pony dangling in the air.”

The clowns, who should not be outdone, pretended to be animals.

“A ‘giraffe’ with a surprisingly active tail could suddenly lift and push its neck at will a few feet and eventually the front end at the rear end got angry so it walked away and the rear end ran along ten feet or more behind. “

Barnes Circus didn’t have any Trapeze artist or Acrobats, but halfway there, had the usual attractions: a bearded lady, a “living skeleton” and an “armless wonder”.