100 years ago in Spokane: Mrs. Corbin’s lover told a very different story about how their relationship began 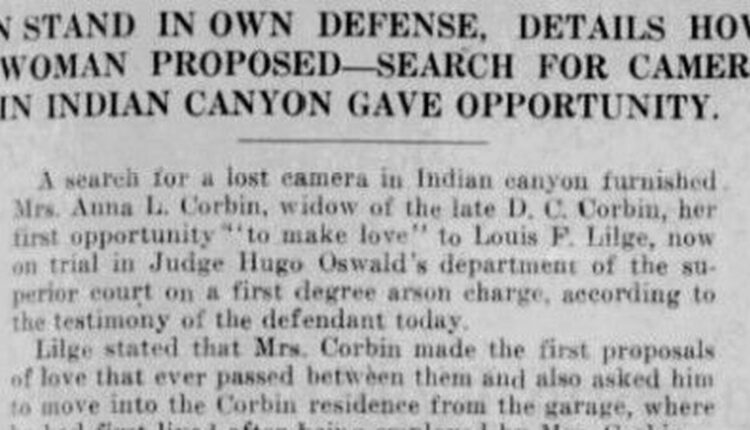 Louis Lilge, charged with first degree arson, told the court that finding a lost camera in Indian Canyon gave widow Anna Corbin an opportunity to confess her love to him, Lilge testified in their joint trial.

She went on a search with him, and in a secluded place Lilge said, “She put her arms around me and asked me to put my arms around her. I told her I didn’t want to and she said I was shy. She said I was humble and that was one of the reasons she liked me. “

Lilge paused to say, “I don’t like telling this stuff. I’m not used to telling these things. …

“Well, then Mrs. Corbin said she was in love with me. I told her not to fool herself and I laughed. “

The next day she read him “The Taming of the Shrew” and talked to him about marriage. He said he would “not marry anyone for their money”.

Corbin had previously told a very different story. She said he had all made progress and at a weak moment she gave in.

However, when Lilge was asked if he had made any advances, he replied, “No, not at all.”

He said she told him he “looked lonely” in the garage and told him to come and play cards in the evening. Then she asked him to move into the house from the garage in order to “protect it from any danger.”

Also on this date

(From the Associated Press)

2013: In ruling its first cases on the matter, the US Supreme Court gave legally married gay couples the same state status as any other married American and paved the way for same-sex marriage resumption in California.

Seattle has a problem going into Sunday