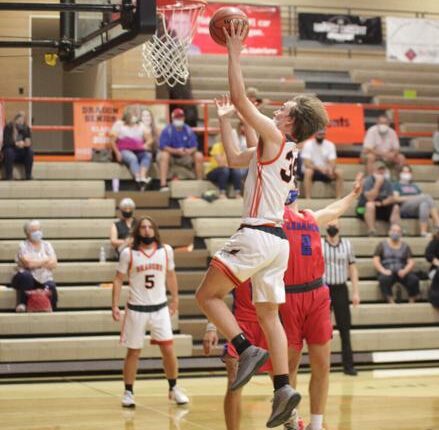 POLK COUNTY – The leaves have fallen, the trick or treating is done, the clocks have been turned back, and now it’s time to get back to playing basketball, wrestling, swimming, cheering, and dancing.

High schools started their official winter sports training on Monday. Coaches and athletes are back to a much more normal state of affairs and routine compared to what everyone went through last season.

The 2020 winter sports season was short and out of step.

“It was crazy like a summer league,” said Jordan Sollman, basketball coach for the Dallas Boys. “We had three games a week and hardly trained. It was a season full of COVID, injuries and kids going on summer vacation. “

Wrestling experienced many of the same extraordinary things basketball did last season. The pandemic generally resulted in lower voter turnout.

“I’ve expanded the program from 13 wrestlers to over 13 in the district,” said Dallas wrestling coach Tony Olliff. “Last year we finished with just 13 (on the team). I’m sure some of this was due to COVID and that I didn’t have daily contact with the kids.

“We didn’t do that well as a team last year and I hope it gets going again.”

With high school sports seasons being so tight, “we barely had time to get ready and then only six weeks to compete,” recalls Garcia.

Swimming was also very different from a normal season. There were no state championships or county meetings sponsored by the Oregon School Activities Association.

“I think we started in late April and moved into June,” said Sean Condon, Dallas swim coach. “The children only had a week and a half to prepare for their first meeting, and the meetings have been cut a little bit.”

“We had to make a lot of changes in the past season,” said Central swim coach Jesse Genualdi. “I think it was better than not having a season. And because we finished at the end of June, we have less turnaround this season. I’m curious to see how that develops. “

COVID-19 concerns will of course continue to affect preparatory sports, and even more so, indoor sports.

The OSAA continues its fall sports policy, still under the guidance of state officials. Everyone at a winter sports event must wear a mask, with the exception of the student athletes and officials who take part in the field, mat, etc., reports Peter Weber, Managing Director of OSAA.

Schoolchildren on the bench would have to wear masks, Weber said, as did the trainer, event management and spectators.

At outdoor events, spectators must wear a mask if they are unable to keep a distance of two meters from others who live outside their household.

The first day for the winter sports competition is Wednesday December 1st.

Central’s boys’ basketball team won’t waste time. The Panthers will end their season at home against Benson on December 1st and then host Cascade on December 3rd.

The boys from West Salem have booked a jamboree in Sherwood (with Sherwood and Grant) for December 1st, and the Titans’ first game is on December 3rd at home against Centennial.

The Dragons also have games scheduled at the Moda Center, home of the Trail Blazers in Portland. The girls play in Mountain View of Vancouver, Washington at 10 a.m. and the boys meet McMinnville at 11:30 a.m., both on December 11th.

The Central boys will be on basketball street a lot at the start of the season. You’ll play preseason games at Ridgeview, Philomath, and Tigard, and then a tournament in Bend, the Oregon Holiday Hoopfest, December 28-30.

The first of 16 Class 5A Mid-Willamette Conference basketball games for Dallas and Central will be played against each other on December 21 in Dallas.

In girls’ basketball, Dallas is with Tillamook on December 2nd to kick off the 2021-22 season. The next game will take place on December 7th in Dallas against McKay. The Dallas Girls will compete in the Cascade Holiday Classic at Cascade High December 18-19, then jump into the MWC game at Central on December 21.

The girls from Central will play in North Eugene on December 1st, then be at home against Cascade on December 3rd.

In Grade 1A, Perrydale’s boy and girl basketball teams will enjoy their first three home games, starting with a visit from Alsea on December 2nd.

The Casco League season begins for Perrydale on December 9th at home against Willamette Valley Christian.

Falls City and Perrydale will meet on December 30th in Perrydale for boys and girls’ basketball.

In wrestling, Dallas will compete in the Weisbrodt Invitational in Lebanon on December 1st with 12 teams.

Central opens on December 2nd with a dual meet at home against Silverton.

The Dallas Central Dual will take place in Dallas on December 8th.

West Salem will open its wrestling season on December 3rd at the Kirk Morey Invitational, an eight-team affair hosted by Reynolds.

Falls City athletes have the opportunity to wrestle with Willamina this season as part of Class 3A Special District 2.

The swimming season kicks off December 2nd in North Salem with a MWC meeting of four teams that includes Dallas, Central, Silverton and the host’s Vikings.

West Salem swimmers will be in the water at the Kroc Center on December 2nd, along with McKay, hosts McNary, South Salem and Sprague.