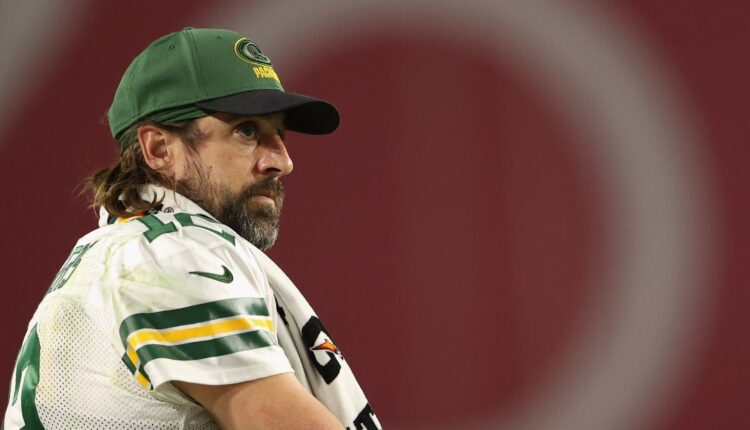 It was revealed yesterday that Aaron Rodgers, quarterback for NFC-leading 7-1 Green Bay Packers and the reigning NFL MVP, has been infected with COVID-19. It also somehow became known that Rogers was not vaccinated against COVID, despite being a traveling athlete who is in close proximity to a number of people all the time.

This second revelation came as a bit of a surprise to NFL observers, as Rogers told reporters at a press conference in August that he was “immunized” against the virus. Mind you, not vaccinated, but “immunized”.

What did he mean by that? Apparently, Rogers was pursuing a homeopathic alternative to vaccination from his family doctor, trying to get the League and Players’ Union to consider him immune enough to be considered fully vaccinated. They said no, this is a fake and then subjected him to all of the league’s protocols for unvaccinated players, which include a 10-day quarantine for anyone who tests positive.

So here we are: a $ 33 million a year quarterback who once won at Celebrity Jeopardy and seems to be a pretty rational guy for the most part (aside from his supposed belief in chemtrail conspiracy theories) has been sidelined because he has a disease that you have to be immunized with two short injections of a safe and effective vaccine. Once again, the actions of a public figure are reminiscent of the official mantra of COVID-19: “Fuck around and find out.”

What is vaccination hesitation? Lots of things, really. It’s a conspiracy theory, a manifestation of the American public’s distrust of doctors and big pharma – distrust that comes from sensible and unreasonable places alike. It is a movement and was one before anyone heard the word “COVID”. In 2019, Vancouver, Washington, where I live, experienced a measles outbreak fueled by vaccine conspiracies broadcast on social media in isolated Russian-speaking communities.

The modern anti-vaccine movement was started by a widely discredited study by British doctor Andrew Wakefield, which suggested that autism could be caused by the widely used MMR vaccine. Instead of backing off when his outlandish claims were dismantled by peer review, Wakefield has instead made a nice little career as a public vaccine skeptic, fueling concerns and the intellects of parents who tend to fear something they are intuitive can not understand. Because, above all, hesitation about vaccinations is nonsense. It is anti-science nonsense that fits well into a number of political and metaphysical forms – a tool for crooks to cultivate suspicion where rationally none should exist.

It appears that one of these crooks managed to cling to Aaron Rodgers and blow up his NFL season. But at least in that, Rodgers can sleep well, knowing that this is quite common among professional athletes. The professional athlete cohort is uniquely susceptible to medical nonsense, and has been for quite some time.

Consider the case of Jim Galvin, a late 19th century pitcher. Galvin was christened “pud” because his scorching hot fastball turned opposing pitcher into pudding on the plate and, despite his relatively small stature, made himself a Hall of Famer.

But as with all athletes, time finally took its toll. Galvin, unwilling to let go, pursued a “modern” solution to aging: dog testosterone. In 1889, Pud volunteered for a hormone replacement study conducted by Charles-Édouard Brown-Séquard, a French-American physician and neurological pioneer. He was injected with the “Braun Sequard Elixir”, a mixture of extracts from guinea pig and dog testicles.

It should go without saying, but I must stress that guinea pig testosterone is actually not a viable performance enhancer in humans, and any improvement someone might experience from the injection is due to the placebo effect. But Brown-Séquard believed it helped him rejuvenate and managed to convince the old pud that it would do the same. When he managed to get his mojo back after being shot in the arm with dog nut juice, he and the press were happy to write the improvement to Dr. Brown-Séquards voodoo mix too.

That said, half-baked medical thinking has been part of professional sport since the beginning of professional sport. Many of our best dubious sports therapy trends are popularized by professional athletes looking for the holy grail of perfect eternal performance. Much of this is nonsense, of course, and some of it is best described as a “Grift”. But the gripping is on a spectrum. Athletes may know intellectually that this crap doesn’t “work” in the scientific application of the word, but professional sport is an enormously stressful, all-consuming occupation and any mental benefit one can find, even if it is transparently placebo, can in a world help, in which success is determined by the fluctuations in the muscles of the fingers.

Some of these aspirations are plain lies on the part of the companies that make them. Take, for example, the Power Balance bracelet, a bracelet with… a hologram in it that its makers said was better balanced. The company was forced to pay a $ 57 million class action lawsuit for bunk suits over its HoloBracelets, but not before they got Lamar Odom to invest in their business and paid Shaq to get one Cut ad for them.

Tom Brady, a public lunatic who formerly played quarterback for the New England Patriots (and managed to get vaccinated), has long been credited with the theories of Alex Guerrero, a “body coach” once tarred by the FTC for counterfeiting was cure concussion. The two came into business together to promote the TB12 Method, an exercise program that puts less emphasis on traditional strength training in favor of a concept known as “suppleness.” Our muscles are more easily injured when they are as stiff as wood. But if you exercise to make them soft, they won’t break. Instead, they absorb the stress and effects of exercise.

None of this is true, of course. But that didn’t stop the Patriots from appeasing their star quarterback, enlisting Guerrero and TB12 to support the team’s athletic training at a facility the company built across from the Patriots’ training facility. When the Patriots concluded that TB12’s methods may have contributed to some injury problems on the team, Guerrero was banished from the building. This created a rift that led to Brady’s departure from the team. His new roster, the Tampa Bay Buccaneers, are more open to Guerrero’s whims.

It’s tempting to read all of this and think it’s just a matter of money: TB12 is Brady’s business, its success depends on athletes adopting and promoting suppleness or whatever, and the patriots disdaining guerrero , influenced the bottom line. But anyone who views Tom Brady as a human will realize one thing: he’s obsessed with football, obsessed with self-improvement, and obsessed with doing everything in his power to stay on the field for as long as possible. At 44, he’s still a quarterback a whopping five years older than Peyton Manning, who played his final seasons with a fused vertebra on the back of his neck.

Guerrero’s methods are almost certainly not what keeps Brady on the field right now. But what this whole mechanism offers him is a sense of control over his body. Brady must enter this field with the greatest confidence that he is poised for the destruction of football. This whole babble is a way to convince yourself that he’s ready like no one else could ever be; a long term psych-up that will help him deliver.

Tom Brady # 12 of the Tampa Bay Buccaneers is about to throw the ball in the fourth quarter against the New Orleans Saints at the Caesars Superdome on October 31, 2021 in New Orleans, Louisiana.

In 2013, on the eve of the Super Bowl, Sports Illustrated released a kind of profile of ‘SWATS’, a sports technology company that sold every form of BS imaginable: ionized water (fake), holograms (even less) real), deer antler spray (works not, and if it does, it would be a PED). David Epstein, an author whose work often blends sports literature with popular science work, tells this story with open contempt for the snake oil sellers who profit from this nonsense. It’s all completely ridiculous. But hey, look at the end: There’s Ray Lewis, the legendary linebacker for Ravens, probably the best defensive player of his generation, who puts holographic pain chips on his sore elbow.

What does he find in pain chips? Again: the feeling of doing something for yourself. Professional sport is an industry that does everything in its power to take it away from you. Teams insist on their own training methods, encourage you to play through injury, and need some degree of dominance over your body in order to give you a paycheck. Striving for alternative methods, including those based on false logic, allows athletes to create a certain distance between themselves and an industry that just doesn’t value their bodies as much as they do.

I think this impulse explains something about vaccine hesitation in a way. American medical care is a nightmare. Patients are at the mercy of tricky insurance companies, the medical establishment is littered with racial prejudice, many people simply cannot afford to go to a trusted family doctor, it just keeps going. The whole system is designed to impose a lack of control on anyone who is not wealthy. Why shouldn’t this lack of control over one’s own health and the misery that goes with it make people suspicious of medicine as a practice? Isn’t it a given that someone whose interactions with doctors are permeated by other people’s self-interests think doctors are mere profit agents?

Aaron Rodgers’ conspiratorial thinking naturally comes from a place of profound, bizarre privilege. The shot obviously works and won’t make you grow tentacles, dingus. But when your sense of biopower is marred by forces that just don’t care about your wellbeing, you naturally get a little suspicious.