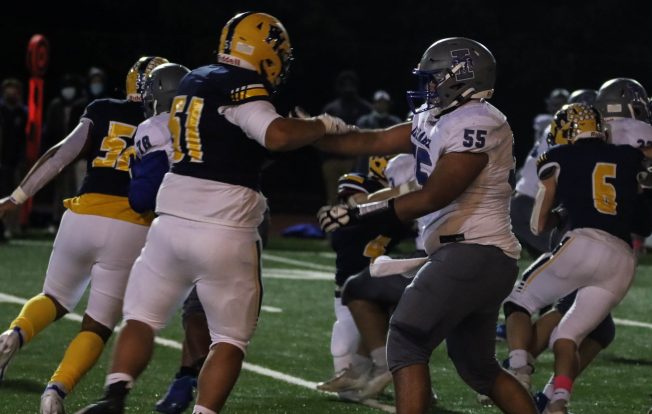 Continuation of our coverage of home soccer games below Nino Cantu Southwest Athletic Complex – West Seattle High School lost a close Friday evening, October 11th, against Ingraham. The game was relatively tepid – and goalless – until late in the first half when the Rams scored a field goal. Not long after, a seizure over a phone call resulted in Ingrahams head coach being kicked out. Then the Wildcats got a field goal: 20 at halftime. It was a busy night for # 20, second kicker Kalei Scott: So it was a 3: 3 draw at halftime. the WSHS tape deliver an impressive show during the break: Back to football: the third quarter went goalless like the first quarter. Things then got livelier in the final minutes of the game. # 6, senior Jaxton HelmstetlerHe scored the first touchdown at 3:29: Two minutes later, an Ingraham TD was followed by a 2-point conversion that gave the Rams the advantage, 11-10. In the last half minute, West Seattle got close but couldn’t get the ball in, so they tried a field goal and missed. Their chances and the clock ran out and the Wildcats got the loss. This coming Friday at 7.45 p.m. they will meet Roosevelt at Memorial Stadium in downtown.