Top 5 experiences you must try when visiting Vancouver, WA

Cities called Vancouver are so nice, they get named twice in the Pacific Northwest!

Canadian Vancouverites are familiar with that initial confusion that happens when we cross the border between BC and Washington State, only to discover that there are not just one, but TWO Vancouvers in the Canadian province and the American state.

When mapping out your West Coast road trip this summer, make a stop at Washington State’s fourth largest city and discover the big city activities, small town vibes, and outdoor adventures that the “other” Vancouver has to offer.

Get better acquainted with Vancouver, WA by learning all about the historical birthplace of the Pacific Northwest (PNW) region at Fort Vancouver National Historic Site.

Situated on the north bank of the Columbia River, Fort Vancouver is the site of one of the first permanent settlements west of the Rocky Mountains. Within the 191-acre area, visitors can stroll through history and uncover a frontier fur trading post at the Hudson’s Bay Company, a military post at the US Army’s Vancouver Barracks, and the wonder of aviation at the Pearson Air Museum.

Tucked between the peaks of the Cascade Mountains and the flowing currents of the Columbia River, and with the iconic Mount St. Helens in the distance, Vancouver, WA is the perfect base for dynamic outdoor recreation in the PNW.

As one of the United States’ 10 National Scenic Areas, the Columbia River Gorge is known for its scenic vistas and sweeping panoramas. For the best of both, head to Beacon Rock State Park — one of the world’s largest monoliths. You can also take a hike along the 1.6-mile trail to the Cape Horn Overlook for unparalleled views that are simply gorge-ous.

If you desire an escape from the crowded trails, take the 40-minute drive from downtown to the picturesque Moulton Falls. The park offers the perfect day trip destination complete with two waterfalls, a wooden arch footbridge, deep pools that double as popular cliff jumping spots, and hiking trails for all skill levels.

For those ready to grab their paddles and head out to the water, Vancouver Lake and Lacamas Lake are ideal spots for kayaking, canoeing, standup paddleboarding, and other watersports activities on the calm lake waters. 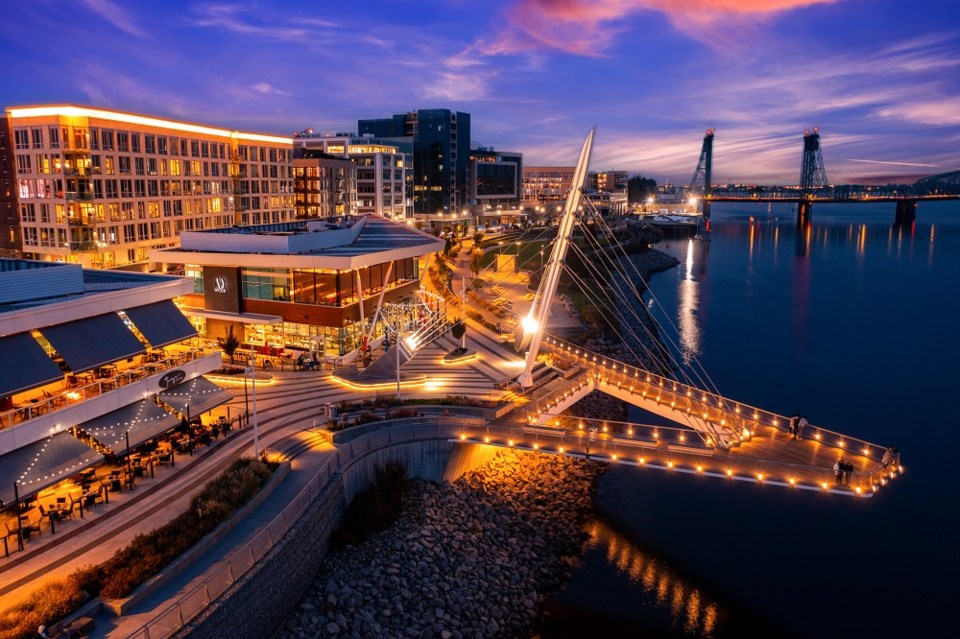 The Grant Street Pier lit up at the Vancouver Waterfront. Photo by Perfect Shot Filming LLC

Take a stroll along the Vancouver Waterfront

Anchored by the Grant Street Pier, the revamped Vancouver Waterfront is the latest addition to Vancouver, WA’s downtown core.

The five-mile Columbia River Waterfront Renaissance Trail parallels the water, and connects the waterfront with the Historic Reserve and downtown Vancouver via the Vancouver Land Bridge. It is lined with local shops and restaurants, sculptures, and historical markers, such as “Wendy Rose” who honors those that worked at the World War II-era Kaiser shipyards, and a brand new 7.3-acre Waterfront Park with an open lawn and seating areas.

A walk along the Vancouver waterfront will introduce you to so many options for fresh and exquisite PNW seafood!

Dine in and catch a dish at WildFin American Grill or Beaches Restaurant & Bar, where both eateries offer outdoor patio seating overlooking the Columbia River. Or, if you’re on the go, swing by the walk-up What A Catch Fishbar window to grab a quick bite of fish ‘n’ chips and a soft-serve ice cream cone.

Sip on local brews in ‘Brewcouver’

Hailed as the PNW’s ‘next beer town’, Vancouver, WA is becoming well-known for its rapidly growing and evolving craft beer scene.

Dubbed ‘Brewcouver’, the downtown Vancouver area is home to over two dozen breweries and several local taprooms. Some local favorite breweries include Loowit Brewing, Trap Door Brewing, and Trusty Brewing. You can find a comprehensive list of even more local breweries and tap houses here.

For more ideas on things to do during your visit to Vancouver, WA, go to visitvancouverwa.com.