They’re back! Tourists return to downtown Seattle, masks and all – KIRO 7 News Seattle 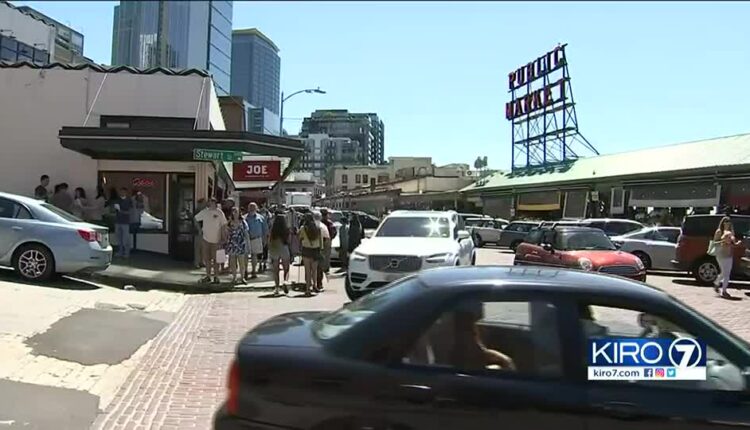 SEATTLE – It’s not just the locals who populate the market at busy Pike Place.

“My parents just flown in from Las Vegas. We came from San Diego, “said Michael Dew, who sees his family for the first time after a private pandemic wedding last year.

He said he’s still getting used to crowds.

“Lots of people when we came in. I was surprised, but not surprised. We only opened in California last week so everyone’s on the go, ”said Dew.

All of these people are good business.

“Lots of people from Arizona, California, Florida. I was kind of surprised how far, ”said McAleese.

But are they adhering to Washington’s restrictions with the different rules everywhere?

“I noticed that people are pretty respectful. They come in with their masks; You ask what the policy is. And that’s nice, ”said McAleese.

In fact, these guidelines can be a plus for some people – like Marisol Ruiz.

“So we could finally get vaccinated and come over,” said Ruiz.

She and her family are from Phoenix, Arizona, which has already reopened.

“Let’s be honest. We know Seattle had really good restrictions and wore masks 6 feet away. And everyone was really vocal about it and got the vaccine. So we knew it would be a really safe place to visit would, ”said Ruiz.

Sure enough for her boyfriend – now fiancé – to ask the question at Gasworks Park.

Places like the aquarium are also seeing a surge in visitors – last week it was more than 2,000 people a day. And there are 24% more pedestrians than expected for the previous year.

Aquarium staff said more than half of the visitors are from abroad.

He said the rules in Washington were an adaptation.

“I’m confident of taking my mask off, but I think we’re doing it for the safety of others too,” Martinez said.

But he will do anything for the cool sea air.

“Even if it is warm here today, we drove home in El Paso – it was 105 degrees. So that’s nothing, ”said Martinez.

Outdoor movies on the waterfront: Drive in or lawn seating