Spokane 100 years ago: Missing woman implicated in the McNutt murder found in a Mexican prison 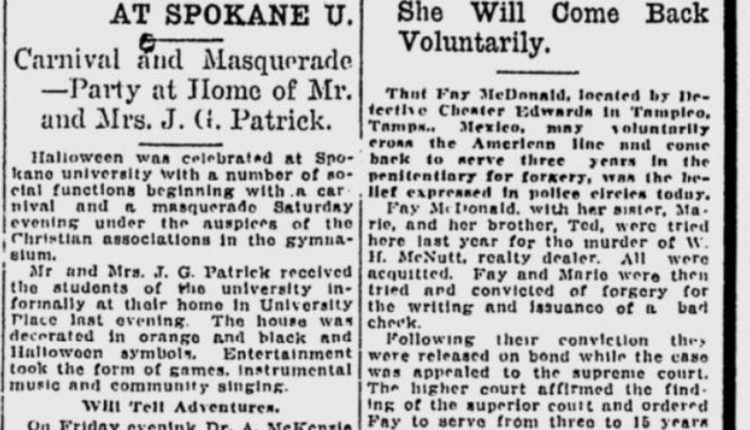 A Spokane detective said he found Fay McDonald, one of the notorious McDonald siblings, in a dance hall in Tampico, Mexico.

She was named Harriet Levernson, but is known to the “American crowd” as “Harry”.

The detective had her arrested by the Tampico authorities, but her friends “raised money for her protection” and prevented the detective from taking her back to the United States.

However, he believed that she would return to the United States of her own accord. She told the detective that she longed to come back because she missed her family and ran out of money.

She had previously been sentenced to three to 15 years imprisonment in state prison for forgery, but disappeared before the sentence was carried out. Her sister Marie McDonald also jumped out before serving her sentence. There was speculation that she was in Mexico too, but no confirmation.

The two sisters, along with their brother Ted McDonald, had been charged with the murder of WH McNutt, but were acquitted in a sensational trial. They all blamed another brother, Will McDonald, for the murder, who disappeared and was never found. The two sisters were convicted of a lesser charge of forgery in connection with the same case.

From the Halloween beat: It was a relatively quiet Halloween in Spokane, with relatively few serious offenses.

The news from Seattle was grim. A 17-year-old boy was seriously injured after a Halloween attendant repeatedly fired a shotgun “to make some noise.”