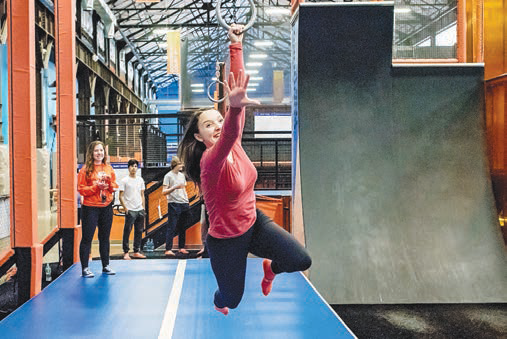 Sky Zone Everett is celebrating its 10th anniversary on Saturday with several special activities planned at the indoor trampoline park on Norman Street.

The event, with gifts, free pizza from Nana’s Pizza, and baked goods from Continental Bakery, begins at 2 p.m. Mayor Carlo DeMaria is invited as a special guest.

Casey McLear, the company’s chief operations officer who oversees Sky Zone’s three parks in Massachusetts, said he and the staff at the Everett site are excited to bring the park back to full operation after the pandemic saw the facility shut down for a year from March 2020 to March 2021.

“We were more than excited to welcome friends, families and the Everett community back,” said McLear. “We greeted them with new attractions that we were really looking forward to.”

Sky Zone Everett has added a Ninja Warrior course as well as a Bungie course which are designed for people of all ages.

“These attractions complement the active and fun offerings we’ve had for so many years,” said McLear. “We held lots of birthdays and special occasions and saw lots of smiling faces.”

“We have opened a special toddler area that we call the Junior Jump Zone,” said McLear. “We have shrunk many of our attractions for those who are learning to jump and hop, so that there is a small trampoline area, a small foam pit, small climbing rocks and an indoor climbing area for children.”

Sky Zone’s Glow program draws large crowds on Friday and Saturday nights. “We do black lights and we have a DJ and everyone wears fluorescent shirts that light them up under the incandescent lights,” said McLear. “It just gives the room a different feel and it was really well received.”

Sky Zone is celebrating several milestones at the event on Saturday.

“Over the 10 year period we’ve had 900,000 jumpers, which is pretty amazing,” said McLear. “We were one of the first trampoline parks on the east coast and were welcomed with open arms by the city of Everett. This is a new era for Sky Zone, and we couldn’t have done this without the support of the community. We are grateful for our 10 years in Everett. “

O’Neill is recognized for ten years of service

Everett-based Colleen O’Neill will be honored on Saturday for her 10 years as a member of the Sky Zone team. O’Neill has been with the company since Sky Zone opened.

“Colleen was with us from the start,” said McLear. “She was one of the first employees to be hired before we even opened in 2011. Colleen has continued to grow with us in a variety of roles and we are excited to celebrate her 10th anniversary as well. “

O’Neill currently serves as the Business Manager at Sky Zone.

People can purchase a pass for $ 129 that entitles individuals to use the facility on a daily basis, year round.

Now On A Winning Streak, Blackhawks Prepare To Take On New Seattle Kraken, Who Have Lost 4 Straight – CBS Chicago

New theater group based in Christ takes over “Matilda”