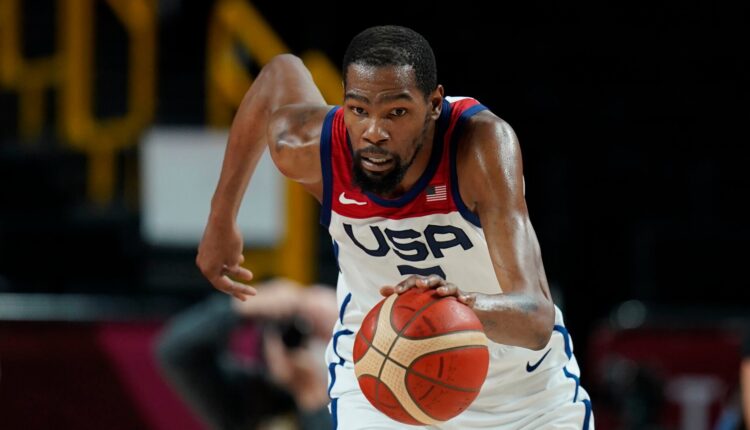 Kevin Durant (7) of the United States chases the ball during the men’s gold medal basketball game against France at the 2020 Summer Olympics on Saturday August 7, 2021 in Saitama, Japan. (AP photo / Charlie Neibergall)

SEATTLE – To celebrate 75 years of NBA basketball, the league announced a team of the 75 best players to ever adorn the sport. This group of distinguished Hall of Famers includes several Seattle SuperSonics legends.

That team was named during the opening week for the 75th. Four players with notable connections to the Seattle SuperSonics made it: Gary Payton, Lenny Wilkens, Ray Allen and Kevin Durant.

Of the group, Payton is most synonymous with Seattle SuperSonics basketball. A nine-time NBA All-Star who spent 13 seasons in the Pacific Northwest, Payton is best known for his overwhelming defensive skills and knack for knocking the ball away from his opponents.

He defended players in all positions without fear in the world because of his unique mix of speed, strength, courage and knowledge of the game. ‘The Glove’ remains Seattle’s franchise leader in games and minutes of play, field goals, assists, steals, and percentage of winnings (a statistic that estimates a player’s impact on winning).

Next up is Lenny Wilkens – another 9-time All-Star who only spent four seasons with the Sonics and made a lasting impression. Wilkens, one of the most respected coaches in basketball history, was one of the few players who served as player-coach. During his stint, Wilkens averaged nine assists per game, which is still the highest number in franchise history.

While his time in Seattle didn’t result in great post-season success, Ray Allen had the best years of his career with the SuperSonics. He played 296 games over five seasons with the franchise. He was an All-Star in each of his seasons with the Sonics, averaging 24.1 points per game during that period.

TIED TOGETHER: The Harlem Globetrotters are coming to the Tri-Cities in January

Last is a semi-controversial pick for this list: Kevin Durant, who only spent one season with the Sonics before they were relocated to Oklahoma City. From the moment he entered the league it was clear that he would become one of the most influential players in the sport.

In his Seattle rookie season, Durant averaged 20.3 points and 4.4 rebounds per game en route to the Rookie of the Year trophy.

With the Climate Pledge Arena opening up to broad community support, it’s only a matter of time before NBA basketball returns to Seattle – whether as a SuperSonics or an all-new franchise.

COPYRIGHT © 2021 BY YAKTRINEWS. ALL RIGHTS RESERVED. THIS MATERIAL MAY NOT BE PUBLISHED, SHOWED, REWRITTEN, OR REDistributed.