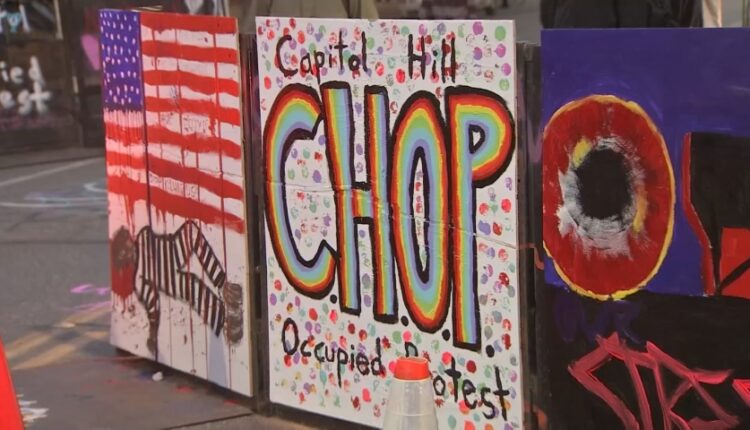 SEATTLE – The City of Seattle issued preliminary approval to a group called CHOP Art to celebrate the June 10th and anniversary of CHOP.

It’s a stark contrast to Thursday when KIRO 7 reported that the American Civil Liberties Union (ACLU) was preparing to sue the city for denying approval.

Earlier this week, Seattle Parks and Recreation denied permission for the nonprofit-organized event, due to begin on Friday, June 11th at Cal Anderson Park.

The city initially said it was concerned that the events to celebrate or commemorate CHOP could be traumatic to the community.

The ACLU and the Public Defender Association found what the city was doing to be unconstitutional.

CHOP Art organizer and president Mark Anthony said the event was not a protest but a celebration.

Anthony was one of the leaders during the CHOP protests last summer.

He said the city reached out to him late last year to help reactivate Cal Anderson Park.

“They reached out to me so that I could offer a positive arts-related program that promotes diversity,” said Anthony. “It seemed like a great opportunity to hold our first event live and in person.”

But after the city filed the paperwork for a CHOP anniversary and June 10 celebration, the city refused approval three days before the event.

“Full of shock,” said Anthony. He has met monthly with the city for more than half a year, and even more frequently in the past few months.

In a statement, Seattle Parks and Recreation cited the violence during the CHOP protest last summer, which included two deadly shootings. The city had said in a statement:

“We will not be giving approval for this event because we have heard from community members who have raised concerns that events to celebrate or commemorate the events in Cal Anderson in the summer of 2020 would be disturbing or even traumatic to the community.”

Anthony said once he got the justification he believed his freedom of speech had been violated. He said the event would continue to take place on Friday, Saturday and Sunday as planned.

“The idea that any number of worried citizens could rob me of my rights is absolutely crazy to me,” said Anthony.

“Sensitive to these concerns, and with caution about the violence in and around the park last summer and fall, and the significant restoration and cleanup work required to restore the park, SPR is using higher than usual safety standards to process all permit applications to Cal Anderson to evaluate. “

The city’s reasons for denying approval immediately caught the attention of the Washington ACLU and the Public Defender Association.

“It’s such a clear violation of the First Amendment that I was quite shocked. You cannot refuse approval based on the content of the event, ”said Lisa Nowlin, an attorney with the ACLU in Washington.

In a joint letter from both groups to the city, they called the denial of approval “unconstitutional” and called on the city to overturn the decision.

The letter made it clear that if this does not happen, “we may need to take legal action”.

“This type of First Amendment activity is protected at the highest level,” said Prachi Dave, policy and advocacy director at the Public Defender Association.

Anthony said the event will feature live music, food and lots of art. He added that there will be security and said that people who want to cause violence are not welcome.

The city did not respond on Thursday to a request for comment on the letter from the ACLU and the Association of Public Defenders.

However, on Friday the city sent out this statement:

It’s important to note that many First Amendment events take place in city parks without a permit. While not required, some First Amendment event organizers request approval to ensure their event does not interfere with a previously approved event or for other reasons.

Requests for approval of the first change are protected by federal law. Additionally, when applications for First Amendment permits are submitted to Seattle Parks and Recreation, they can ask the group to use a different park if a pre-planned event is taking place, or advise the group to change aspects of their event to make it more successful . The City of Seattle gave preliminary approval to a group called CHOP Art to celebrate the June 10th and anniversary of CHOP.

City: Event would be “disturbing or even traumatic” after CHOP violence last year

The ACLU is unconstitutional