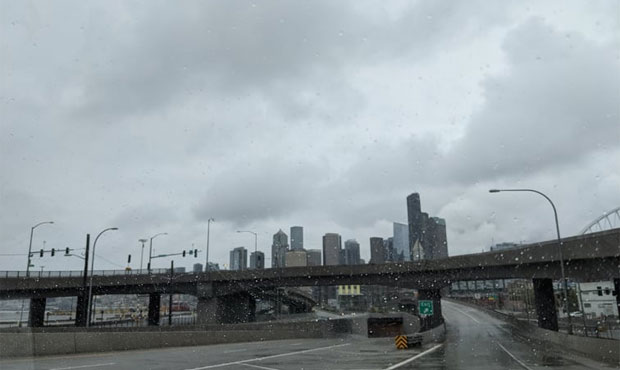 The first big storm of the season has arrived and the rainfall records are already beginning to fall.

The first mountain snow of the season this weekend heralds autumn

The rain hit the Puget Sound area on Friday afternoon, breaking the September 17 record for both Bellingham and Quillayute, who saw 1.45 and 3.05 inches for the day, respectively. The previous record for Bellingham that day was 0.93 inches; The Quillayute record was 1.97.

Here is the rainfall for the past 24 hours in West Washington, ending around midnight. Here on the NOAA campus on Lake Washington, we received 0.60 “of rain on September 17th – and more is falling this morning. Pic.twitter.com/BGJNzkNhI0

The showers increased on Saturday and it is expected to rain well into the evening. While the probability of thunderstorms on Friday was “low”, the KIRO 7 meteorologist Morgan Palmer says that there is a “better chance” on Saturday or Sunday afternoons.

“National Blend of Models has a 30% chance of a thunderstorm in the Seattle region,” says Palmer.

On Saturday afternoon, the temperature at Sea-Tac Airport fell from 62 degrees to 53 degrees. The wind was blowing at 30 miles per hour and a quarter of an inch of rain fell in 40 minutes.

Over the past three months, Seattle has seen an estimated 0.13 inches of rainfall. Had that number lasted through September 20, it would have been the lowest sum for the summer season since 1945. Instead, according to National Weather, the region is likely to receive “more than ten times the rain in less than 48 hours” (NWS) service.

On a typical September, Seattle averages 1.61 inches for the entire month. Between Friday and Monday morning alone, Seattle is projected to grow between 1.5 and 2 inches in just 72 hours.

The city of Seattle warns that power outages in some neighborhoods are “unfortunately inevitable and uncomfortable”. City Light advises all residents to prime the batteries in flashlights, camping lanterns, and “other flame-free backup lighting options” in order to prime them. You can monitor outages at this link.

That’s all part of what University of Washington climatologist Cliff Mass calls “the storm we’ve been waiting for” after a summer of scorching heat, dry weather, and record forest fires.

“This rain will mark the end of the forest fire season in the northwest, the remaining fires will quickly recede with the massive humidity, high relative humidity and MUCH lower temperatures, with peaks falling in the lower 60s,” predicted Mass in a recent blog Post.

Large September rainfall events in Seattle have typically peaked at 1.5 inches for the total number in a day. Should the values ​​exceed this threshold, this could represent a new daily record for the month.

Mass believes this will mean even more rain in the coming weeks, and cites forecasting models that show “a lot more will come after that”.

This will be a welcome relief for much of West Washington after a summer that saw the Seattle area saw 51 days of rain-free days, setting a 1951 mark for the second most consecutive dry days the city has ever seen. A heat wave in late June also set records for the hottest day ever for Seattle, Bellingham, Olympia and Quillayute, with temperatures between 99 and 108 degrees.

Breakdown of the records broken during the Washington heat wave

After a wet weekend, it should be drier at the beginning of next week, says Allard, “with a little more sunshine”.