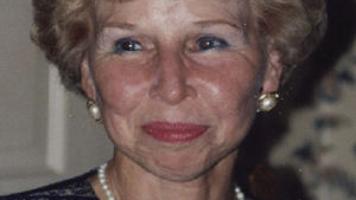 In 1955 she married the late Lt. Joseph H. Shaw and accompanied him to Boston, Massachusetts, where he did his Masters in Business Administration from Harvard University, while Lyna worked as a reservations clerk at American Airlines, the beginning of her career in the travel industry, travel is a passion in her life. After Mr. Shaw’s graduation, his professional career took her and the two boys to Longview, Washington, where they lived for six years.

Two sons, Thomas Alden Shaw and Scott Wightman Shaw, were born there and completed the family. Before retiring to Williamsburg, Virginia, the family also lived in Ohio; North Carolina; Minnesota; Connecticut; and Brussels, Belgium. Ms. Shaw has worked as a travel consultant and freelance writer in many of these locations while pursuing her passion for tennis, bridge, and community theater through plays and musicals. All their lives Lyna and Joseph traveled all over the world. It was a well lived life.

A life ministry celebration is scheduled for Saturday, December 4th at Williamsburg Landing in Williamsburg, Virginia.

In lieu of flowers, we would appreciate commemorative donations on behalf of Lyna to a charity that focuses on women’s health.

Sign up to get the latest local obituaries delivered to your inbox.