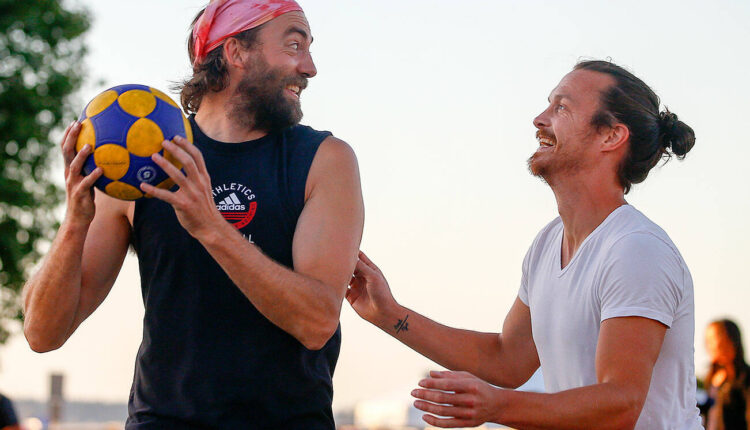 The reaction is in the eyes.

Any time the PNW Beach Korfball squad sets up shop on the sand, whether it’s at Mukilteo Beach or Golden Gardens in Seattle or anywhere else, it inevitably draws gazes from passers-by. Children gawk wide-eyed as they watch teams of women and men tossing what looks like a slightly-shrunken soccer ball toward a basket at the end of a tall pole. Adults get quizzical expressions on their faces as they try to puzzle out what’s going on and how the sport works.

“We always get some looks,” PNW Beach Korfball founder and Everett native Bill Johnson said. “We’ll get people who just stop and stare and try and figure it out. A lot of them will stop and say, ‘Wow, that seems fun!’ We’re still trying to figure out the quick pitch.”

The character-limit version is that Johnson and his small cadre are playing an intentionally-coed sport with a funny-sounding name that is something like basketball on the beach. This is beach korfball, a sport virtually unknown in the United States. It’s the latest endeavor spearheaded by Johnson, who has a history of finding unique sporting experiences and throwing himself fully into them.

And the goal is to take a team that’s only known the sport for a matter of months and challenge the best the world has to offer.

Who is Bill Johnson?

Remember those Dos Equis commercials you’d see on television during the early 2000s? The ones featuring the most interesting man in the world?

Bill Johnson is the Snohomish County sports community’s version of that guy.

The 2005 Kamiak High School graduate has spent his entire adult life using sports as a vehicle to adventure his way around the world. Following his college basketball career at MIT Johnson played professionally in such far-flung locations as Costa Rica, Iceland and Cape Verde. He journeyed to the Tibetan Plateau village of Ritoma to coach nomads in basketball. And he starred for the national beach handball team as the fledgling U.S. program produced shock results at tournaments in Venezuela and France.

Johnson, who looks the part of a world adventurer at a towering 6-foot-8 with shoulder-length hair and a full beard, is currently back in the U.S. as he waits out the coronavirus pandemic before returning to Tibet. So what does someone like Johnson do with spare time on his hands? He finds a new obscure sport to master, in this case beach korfball.

What drives Johnson to take on these unusual sporting challenges?

“That is a great question,” Johnson said with a laugh.

“Playing is something that’s seemingly innate for any transient being. It’s a very natural thing, and it’s a fun experience that comes with so many good things. I don’t think it’s childish to want to keep playing. I just like playing and think it’s a fun way to approach life.”

But Johnson has a co-pilot on this particular flight.

Ashley Graham shares Johnson’s adventurous spirit. The Redmond native and former standout for the Santa Clara University women’s basketball team also played professionally around the world. She was invited onto Italian television to set the Guinness World Record for most free throws made in one minute by a woman. She even followed Johnson to Tibet to coach Ritoma’s women’s team.

Graham was the first person Johnson contacted after discovering beach korfball. Johnson may have started the engine, but Graham has spent plenty of time in the driver’s seat of the PNW Beach Korfball vehicle.

“I think a major part of it for me was missing playing basketball,” Graham, via email from Italy where she’s vacationing, said about why she’s so committed to the cause. “Even though I’m retired from pro basketball, I still love to play and basketball is my favorite form of working out. When COVID essentially took that away besides shooting on my own for a while, korfball felt like a perfect substitute.”

What is beach korfball?

Sean Hermes had no idea what he was looking at.

Hermes and Johnson are longtime friends. As seniors they helped the Kamiak boys basketball team reach the state tournament for the first time in school history. They’ve remained friends despite Johnson traversing the world while Hermes has settled into a position with Seattle Parks and Recreation.

Therefore, Hermes was one of the first people Johnson introduced to beach korfball. Johnson was visiting Hermes’ home in Seattle, which is across the street from Magnuson Park, when he got Hermes on board.

“He had this jury-rigged hoop in the back of his van,” Hermes recalled. “He opened the door and I asked, ‘What is this?’ He set it up at the park, I took a couple shots and was hooked instantly.”

So what exactly is beach korfball?

The sport of korfball was invented by Dutch school teacher Nico Broekhuysen in 1902. Broekhuysen was looking for an activity that all his students could participate in — both girls and boys — and would teach concepts like teamwork.

Korfball in the traditional sense is played indoors. The court features two baskets, 16 inches wide, attached at the top of 11-and-a-half-foot poles, one on each side of the court. There is no backboard, so players can shoot at the hoop from a 360-degree arc. There’s no dribbling, so ball movement is done solely via passing. Players are also prohibited from shooting if a defender is within an arm’s length.

A korfball hits the edge of the basket Thursday evening at Mukilteo Beach on September 9, 2021. (Kevin Clark / The Herald)

The thing about korfball that makes it unique is that it’s strictly coed, with each team having an equal number of female and male players.

Johnson, because of his background in beach handball, was naturally drawn to the beach version of korfball. Add in that fewer players are needed for a beach team (a beach team is comprised of two women and two men while an indoor team has four women and four men), it’s easier to find an open patch of sand on the beach than an indoor facility, and the fact that the beach version is a little better suited to people with basketball backgrounds because the smaller court means shorter shots, and beach korfball was the choice.

“I always explain to new players trying beach korfball for the first time that it is essentially basketball on the beach,” Graham said. “You can’t dribble in sand anyways, so it makes more sense that you can basically only pass and cut. I also tell new players that physically it’s more exhausting than basketball. It’s so difficult to move in the sand.”

Given the difficulty of procuring korfball equipment, Johnson originally constructed two korfball baskets himself. Eventually he acquired two regulation baskets — on which the bounces are less friendly, causing the team’s shooting percentages to drop dramatically — and several official balls, and weekly sessions began at beaches and parks around the Puget Sound region.

Johnson was watching a YouTube video when he first discovered korfball.

Johnson’s exposure to new places and cultures piqued his interest in concepts like the sociology and anthropology of sport, and one day he found himself viewing a lecture by University of Michigan professor Andrei Markovits about how sports are reshaping global politics and culture. An hour into the lecture Markovitz made a remark about korfball being the only sport in the world that is intended to be coed.

Johnson was intrigued. He began researching the sport and found it was legitimate, as it’s part of the World Games, which is the International Olympic Committee’s quadrennial event for sports that aren’t contested in the Olympics. That led to the discovery of the beach version, which was more to his liking than the indoor version. He saw enough similarities to basketball that he thought his skills would translate.

But the lure ultimately came down to that one quality: The sport is coed.

“It’s truly a coed sport in its DNA,” Johnson said. “That’s what it is at the highest level of competition.”

“I love that it’s coed!,” Graham added. “I grew up playing pick-up basketball with boys and currently play in a men’s basketball league at the Washington Athletic Club. But seeing this is one of the only sports out there where men and women compete on the same court/field/beach at the same time is just really awesome.”

What is the goal?

Steve Barker has likely seen more korfball than anyone else in the U.S.

Barker, who’s originally from the United Kingdom, has been involved in korfball for 45 years. He was a member of the British national team as a player, and spent decades in coaching and development at the national level before moving to Los Angeles in 2009.

So Johnson tracked Barker down and convinced him to come to Seattle for a day of training and to officiate a four-team tournament on Sept. 4 at Golden Gardens.

“Bill has a really nice core group of former basketball players, and they’ve been working toward it,” Barker said via phone from Los Angeles.

The “it” the team is working toward is the first ever World Beach Korfball Championship. Originally it was scheduled to take place this summer in Morocco, but was postponed to 2022 because of the pandemic.

PNW Beach Korfball, by virtue of being the only official club in the U.S. and perhaps all of the Americas, is already entered.

The team has a core of five members who are committed to playing in the World Championship, whenever it takes place. Those five are Johnson, Graham, Hermes, Graham’s boyfriend Jeffrey Merrell, and Alyssa Shoji, who also was a standout shooter for the Santa Clara University women’s basketball team. They’re hoping to add at least one more woman, and perhaps increase the squad to eight.

And the world, led by the International Korfball Federation, has been welcoming.

“The international support has been awesome,” Johnson said. “People want to come play here, they’ve asked us to play in their countries. The International Korfball Federation has been sharing our photos on Instagram. I think they’re happy to see a small sport like korfball get traction in a place like the U.S.”

There isn’t much in the way of beach korfball video footage to view to get a sense of how PNW Beach Korfball may stack up against the rest of the world. But they’re using every bit they can.

PNW Beach Korfball will need every bit of information and advantage it can get in order to compete. But it has two factors working in its favor. First, the beach variant is relatively new, only coming to prominence over the past five years, so everyone is relatively new to the sport. Second, the world’s greatest korfball power, the Netherlands, has continued to focus on the indoor version and put little emphasis on the beach.

So maybe they have a chance?

“I have absolutely no clue,” Hermes admitted. “The competitor in me wants to say we’d be OK and be able to compete, but honestly we don’t know if we’d go out there and get skunked.”

Barker has no background in beach korfball, but his history with the indoor version at least gives him a better basis for evaluation.

“They have some very good athletes, the core group they have are all good basketball players, so they have those key skills there,” Barker said. “They’re very enthusiastic and very keen to learn. They were a nice group to work with and they were able to pick things up very quickly.

“I think they have quite a good chance of being successful there and causing an upset.”

Who knows? But because of Johnson and his latest sporting vision quest, we’re going to find out.

A korfball hits the edge of the basket Thursday evening at Mukilteo Beach on September 9, 2021. (Kevin Clark / The Herald)