Kansas Wesleyan’s Tabetha Yours leaves a legacy in the cross country, track 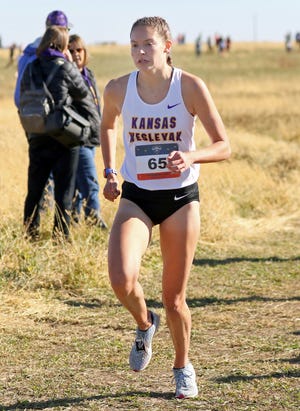 When Tabetha Deines ended her high school cross-country skiing and track career, she could no longer imagine competing again.

After graduating from Salina Central, Deines went to college at Wichita State University and then realized something was missing. She missed running, which she had been doing since she was eight while attending youth athletics meetings.

“I remember going up to my mom after doing one of them and thinking, ‘Mom, I love all these other sports, but running is my absolute favorite,'” Yours said. “It was always this sport that I enjoyed the most and that I enjoyed the most. The passion comes from my 8 year old self and it always came about as I grew up.

Yours moved to Kansas Wesleyan University after a semester at WSU and doesn’t regret this decision. In her third and final season as a coyote, Deines is making her second trip to the NAIA Cross Country National Championship, which will be played in Vancouver, Washington, on Friday.

Yours qualified for the Nationals with an 11th place at the Kansas Conference meeting on November 6th in McPherson. She is supported at the national meeting by her teammates Stephanie Martinez and Daniel Harkin. Martinez finished sixth in the KCAC meeting while Harkin finished 14th.

Harkin will run at 8.15am, while yours and Martinez will compete at 9.15am

“This is the group that we knew would lead us all year round,” said KWU coach Kyle Hiser. “With Steph and Tabetha it was easy to get back there and the execution was the greatest when you knew you had it done once.

“As Dan is a newbie and plays tennis … it was a little different this year, but we figured it all out with him. He started training with us full-time in October.”

With yours going to the National Meeting for the second year in a row, there is some pressure to improve on her performance at the Spring National Championships in Cedar Rapids, Iowa, and to see others finish behind her and want to improve too.

“It encourages you to run faster,” yours said. “Somehow I thrived there. I feel like I belong there.

“I think last year showed me that because last year I was kind of on the fence and then I did it, and I did relatively well there, especially in the middle of the track season.”

Yours has slowly changed and worked hard on their craft

After moving to the KWU, yours had to work back into the running routine.

Her freshman semester was her transition period and during her sophomore year, Hiser was hired as a cross-country and track and field trainer at KWU. At first yours thought it would be fun to run both college grade cross country and track, and she would be a decent athlete. She exceeded these expectations.

“I really didn’t know how much potential I had. It was definitely fun to find that and to know that I had it in me.”

Yours says she likes leading the team and it helps other teammates, both on the women’s and men’s teams.

“When either of us does a good job, it usually spreads across the team,” said Deines. “I know I have teammates who like to look up to me and that’s why I have to show up for them. Taking them with me and running with them every day was a big part.”

Hiser agreed, adding that she put Salina on her shoulders while influencing the program.

“I think she’s really proud to wear this badge as she is from Salina and is one of the more successful runners to have left the area in a minute,” said Hiser. “It was exciting to see that she is getting better every season and that Cross (Country) is not her favorite. She loves the train.

“She’s so helpful with recruiting. She’s a leader on campus, not just our sports and athletics and cross-country programs.”

One thing that has helped yours in their Wesleyan career is having a training partner and teammate to help them. Enter Martinez. Since yours returned to Salina, she and Martinez have been best friends, running partners and even roommates during their time at KWU.

“I just had to get used to it because I was always used to being alone,” said Martinez. “It was just really nice to have someone who drives you. We were there to push each other.

“Knowing that she was going to have a successful season made me really happy because I know it’s not a season that she particularly likes. But she wanted to destroy it. I think it’s a very big confidence boost for her Headline.” into the railway season. “

Since Friday will be the last cross-country race of her career, yours is hoping to bring some momentum into the indoor season. She became a NAIA All-American 800 meter run during March indoor season and plans to do the same in 2022.

“This is what I really want to take away from this international match, is just a strong performance to show myself, ‘Hey, we squashed it here, now let’s get that momentum on track,'” said yours.

“It will be different to stand on the sidelines and withdraw from the actual competitive side,” said Deines. “I can help my teammates who are now my teammates and just see into the future.”

Martinez is making her third trip to the national championships after finishing sixth at the KCAC meeting.

She will be teaching a course she taught during her sophomore season.

“She is looking for redemption,” said Hiser. “Conditions shouldn’t be great and then Steph will do best when the conditions aren’t 100%. These conditions will be incorporated into Stephanie Martinez’s race schedule.”

Harkin will be making his first trip to Nationals

Harkin has had a busy first semester in Wesleyan.

In addition to the cross-country run for the Coyotes, he also plays tennis.

Since Harkin had not attended most of the KWU meetings and had fought against diseases, he still managed to qualify for the national meeting.

“I’m just really happy,” said Harkin. “Cross-country skiing in college is a lot harder than high school. I enjoy it. I think it’s definitely harder, but it’s part of the fun.”

Hiser said Harkin was ready for the challenge.

“He knows what it takes to run at championship level, which is really exciting,” said Hiser. “Despite being a newcomer, he has gone through some of these difficult moments and we are excited to see what he can do out there.”

Dylan Sherwood has been a sports reporter for the Salina Journal since August 2019. He can be reached at [email protected] or on Twitter @DSherwoodSJ

Health politicians call for adaptation to climate change during the forum